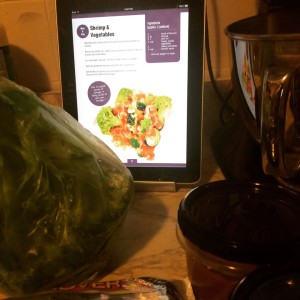 Reuse your old iPad!  Check out how I’m using those iPad 1 devices laying around in my video production, and cooking!  How do we hand down our iPhones?

What do you old with your old tech?  Is it repurposed, or sold for recycling? 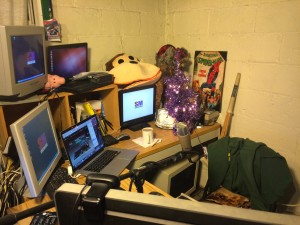 I have a wonderful collection of old gidgets and gadgets.  Some featured in the background of my video version of the shows!  Why do I hold on to such things?  Do I have a problem?

What old computers and tech do you hold on to?  Does anyone have a Tandy out there?

Last week on AwesomeCast, we broke it down geek style towards the end and got SUPER geeky about the state of the podcast studio.  If you want, you can watch that segment here:

We talk on there about the vision and challenges to try to make the show even better.  But the biggest message was the community that helps bring this thing together. 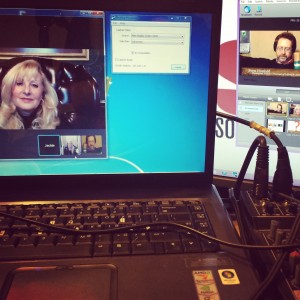 So much of what I’m sitting on down in the studio is contributed.  I have old PCs that are given because they outlasted their user, or they needed an upgrade, but serve a purpose when I throw Ubuntu or Windows XP on the old thing and only want to run one function like Skype or Google Hangout to help broadcast my talking heads for the shows.

Under my desk in my shot are a few CRT monitors.  Through the basement studio, there are a few tube TVs.  They don’t sound like much, but if I need a new head for a computer, or want another monitor so everyone sees what I’m switching, they come in handy.  And why stock up?  They keep coming, and they’re old.  So I’m always ready for a replacement.

In that clip above, you see the phenomenon.  An outpouring of “hey, do you want this thing just laying around here?”  My philosophy with friends and family is I’ll take anything.  If it’s not useful, I’ll at least make sure it’s recycled with a trip to Construction Junction.

This demonstrates the amazing community we’ve had on our Tuesday Podcast Day experiment that just keeps growing.  People contribute tech, and in some cases, their time just to be a part of it.  Which has been instrumental in it’s growth over the last year in scope and quality.

It’s come a long way from my and some friends huddled around a cheap PC microphone eight years ago.

This week started our roll out of the new Sorgatron Media layout and WordPress 3.0 Multi User account.  Basically that means that all of the sites are going to be managed by one login and show posts, for example, will only need to be made once and shared across the show and main web site.  So far the main SorgatronMedia.com is rolled over, as well as MusicFuntimeShow.com, since it’s one of the smaller of the sites I had to convert.  The rest of the shows will follow in due time!

A big thanks to Norm Huelsman for the advice about the WordPress 3.0 abilities and theme suggestion!  He has a number of great posts and even presented on WordPress at Refresh Pittsburgh.

This was great to get Walt Ribeiro on board to do a show.  I met Walt fist back at Podcamp Pittsburgh 3 and loved his session on how he just dropped everything and made a business out of himself in six months.  He was a great personality that fit right in with our attitude on the show and sharing thoughts on the stories of the week.

We had some tech problems with Skype on his Mac for some reason.  This has been a long standing problem that Skype seems to have less readily available options so that if there is a problem, there’s not much we can do to figure something out of it.  Thankfully, the stars aligned and Walt had Google Talk installed, so we brought him up there.  Again, I can’t go full screen, but I did find the ability to crop my Desktop Presenter so no one would no on the video stream.  Unless you notice the small window behind me on the studio shot.

Great to be back in the studio.  I had one of those rare moments where I had a chance to rant on some wrestlers that tick me off.  So much so, that I posted the clip separately on request.

This is where I’m finding some trouble.  On both recordings of the show, about 40 minutes in, Wirecast crashes.  Actually not just Wirecast, the entire Macbook froze.  I couldn’t recover the files due to the length being indeterminate according to VisualHub.  Thankfully, we stream our show up to Justin.tv, who auto records everything!  Show saved.  A quick push to Youtube, download as MP4, convert to DV for editing, and we’re back in business to carry the editing process from there…

Chachi reviews his new Android T-Mobile G2.  Thankfully this means he’ll have a new phone to shoot video on that should beat the pants off what he’s been using when doing solo shoots.  Good conclusion to the ongoing next phone saga.

Chachi returns to his fan request concept, and continues with the next week’s.  He’s really building a real interactive community.  We’re going to have some fun working with that here in the near future.

From all of the crazy reorganized scheduling from this week’s Baristas shoot, we managed to find time Tuesday to film AwesomeCast on location at Rob’s place.  I’m really enjoying the experiments we’ve had with this show’s setup.  A laptop running my trusty BoinxTV, and my Panasonic patching in firewire and the shotgun mic.  An easy 2 camera setup.

I’m looking forward to our next few lined up guests, and some fun in studio stuff.

And speaking of in studio, you can’t have a bad show with our favorite local indy guest Jimmy Demarco.  We were supposed to do this Sunday, but had to back this up to Thursday due to some unavoidable issues.  But we had a great hour and a half with Jimmy and Chest Flexor.  The fans were alive in the chat, despite the recording date move, and the questions pored in throughout the week leading up.  Jimmy lost his career ending match Saturday night, but I hope that doesn’t keep him from stopping by to have some fun on the show.

Dr. Espling really stepped up our show quality this week.  He moved his segment from an audio setup to video to suite our expansion to YouTube and Blip.tv and stepped things up.  No I have to work on the rest of the show to keep up with what he’s submitting.  Only leads to great things.  Also part two of my interviews at TrackAddict Records with my old friend Paul Hammond.

With the whole crazy schedule, I didn’t get a chance to do our wrap up video, so I decided to throw something together when Chachi was over tonight doing this week’s Chachi Says.  Look for that late Monday.