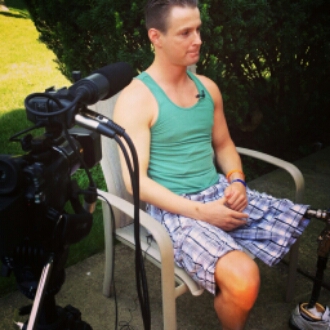 This past week, Sorgatron Media had a hand in a new release along with Outsource Announcing, the banner of my good wrestling business friend Joe Dombrowski, entitled “Finding Zach Gowen: The Life Story of the World’s First One-Legged Wrestler“.

This was my second big documentary project with Joe. And I’m sure we have both learned much from our work in our first works of this nature.

I had first met Zach helping with some production for Prime Wrestling around Cleveland. But it wasn’t until a weekend we spent last July where we filmed the bulk of our documentary that I got to know him through interviews and conversation. It was a pleasure to work on this story for someone who I remember watching on television as I was struggling through college. I had no idea of how the story progressed after he faded from television.

Working with some of my clients that work with addiction and education, it was facinating to see what this guy had gone through. There’s what peoplle mostly know: he lost a leg young to cancer, and overcame to become a wrestler signed to the WWE at 19 years of age. But the continued story of his falling again, and so much harder and the triumph is amazing. In a day where we just saw success stories like Jake Roberts and Scott Hall also come back from similar dependency issues makes this a golden age for wrestling. It’s so great to hear good news from, in that instance, two guys we would have never been surprised if they turned up dead in the news. Instead, we have stories like Hall, Roberts, and now Gowen that can inspire those in the business that there is hope for a future after WWE after dropping so low.

As a documentary maker, I learned a great deal as well.

This marks my third lengthy production as a documentary. I’m not counting the countless 15 minute training videos, or two hour talk show netcasts, but this, Montreal Theory, and a little seen Sarah Heinz House green building documentary I helped patch together in 2007. I was excited for this project because the oppurtunity to create something with a mass appeal, and hopefully reach people outside of this wrestling world. Montreal theory was a 5 hour glorified shoot interview about the infamous “Montreal Screwjob”. I loved it, but it was for the hardcore wrestling fans that will sit through a wrestler telling stories for two hours straight. It was edited, but not really for flow. It seemed like just people taking turns telling their side of the story. It wasn’t a movie per se. But it was never intended to be.

“Finding Zach Gowen” attempted to take this a step further. We added more elements, including pictures and footage too highlight the discussion. The flow was much better. This actually looks closer to the personal quality vision.

Work on that time table. Both of these projects had deadlines for Wrestlemania. Montreal was started a few years before launch, and languished due to our busy schedules, maybe missing the hot time as Bret Hart came back, made up with Shawn, and everyone was reminded once again of the incident. This one started filming in July, and finished editing a week before our intended launch. Yeash. In the long run, I will never think I’ve had enough time on a project. There’s always something I wish I had done better. I wish I had maybe two more passes to work on the flow and some more technical details to put this show on par with the (better) documentaries I watch on Netflix. And I wholeheartedly believe it is better than some of that stuff. But I always want it to be better…

The importance of your organization platform. I learned a lot about the tools I use. My regular work these days are the post clean up on the #podcastday shows, so having something larger to organize make me find reasons to use keywords and that odd Marker list I never understood beforehand. The Marker as a to do list function was life saving as I’d create a list as I came across issues to get back to instead of stopping a pass through on a review.

Maybe I’m Ready. Up until now, these projects have been a bit of a collaboration. I’ve fought a director’s credit on these as I’ve really been putting together someone else’s vision. I have a subject or two I’m going to start exploring.