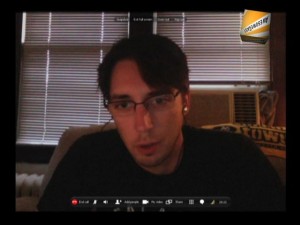 This week, we launched a new concept we’ve been trying to develop for a few months now.  I’ve been inspired by concepts like Penn Point, and thought that a certain friend of mine would be a great fit to be given a similar mouthpiece on the internet, in video form.  I love his ingenuity in getting the concept down, incorporating a typical webcam, Blackberry, and G1 phone, we’ve been able to cobble together something that’s cohesive, and I hope, visually interesting.

Got back to basics, and our usual time, again, as we brought on Norm Huelsman to talk some Podcamp Pittsburgh, iPods, and a bit more.  Norm was a good voice that had a bit to say about the stories we brought up.  Chachi joined us again, as I try to flesh out the format.

We ended up with both Hotwheelz and Rizz on the show due to some Skype experimentation beforehand.  We were trying to max out the 10 calls for the updated Skype Beta, to little success.  Mike dropped in on a second line, and we were good to go.  It was another show where things got pleasantly out of hand, which I think we’re both famous and infamous for.  I also determined we don’t have enough detractors.  Because I’m sure people don’t like this show, but no one speaks up except the guy Mad Mike met at San Diego.

We got back to our interviews after a couple weeks of experimenting in Pittsburgh’s own Amuck.  Always a fan of interviewing local talent.   Also got a chance to feature another Pittsburgh local in Sikes, and some brand new release from Scrub Club, who has been turning out new music left and right lately.

Also, along with the usual shows, I continued with the video blog, which I think will be a good fit for the sort of post-recording decompression I go through every week before hitting the “editing bay” for the night.  Hope people dig it, and please, drop me feedback on all of this to let me know what you’re digging or not digging…