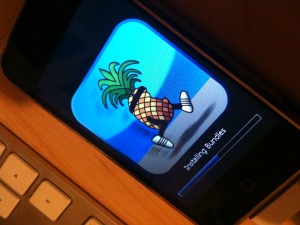 Last week, my brother had the oppurtunity to get his iPhone 4.  This meant that my old iPhone Edge, which I had given him to play with as an iPod Touch without it’s service, was coming back home.  This phone was bought from my coworker, used for a year, and then given to my brother, so it’s seen it’s share of use.  So finally, I had a spare iPhone (I’m still running a 3GS) to play with.

So Friday night, I ventured into the world of Jailbreaking.  After a bit of research on the different methods, I went with the redsnow option.  The biggest hangups I had was the instructions that worked off of you just updating your phone to 3.1.3 (the highest you can update the iPhone Edge to.)  or the need to not have the most recent iTunes, which I have on all of my machines.  Those that this isn’t an issue, the Spirit method seems easiest.

My Jailbreak Philosophy.  I won’t be jailbreaking my 3GS. Until I get the iPhone 4, or iPhone 5.  When I buy one of these phones, I’m buying into the experience, for better or worse.  Already, I’m seeing some of that experience breaking down as I tinker with parts of the OS in this version.  I’m less afraid of bricking my phone than slowing down my usable phone.

I refrianed from the Android hack, since it’s so underdeveloped, and this was a good choice.  Redsnow installed Cydia, the Jailbreaker’s supplement to the App Store (which still works) and you’re ready to go.

Cydia…has to be the roughest experience.  It loads information every time I open it that takes forever on my wifi.  But it will install and setup things tidily, after a little bit of command line display.  But a better option is…

Rock Your Phone. This came with some of the emulators, and serves as a “monetization” outlet for Jailbreak developers.  Basically the App Store for the underground.  Some of the software I’ve played with comes with trials, and you’re app buying occurs over Google Checkout or Paypal.  That feels safe enough.  I have some caveats, but I’ll talk about them at a later date.

Categories.  The jailbreak equivalent of folders.  Not terrible elegant, but gets the job done.  You also get the option to hide icons, like the call and messaging ones, in my case, that I don’t need since there’s no phone service attached.  I refrain from multitasking, because it’s so much slower, and not even the 3G was allowed to in the official release.

Emulators.  This is a huge reason to jailbreak.  If you want the equivalent of all of your old consoles in her hands, this is it.  The genesis4iphone and nes4iphone are both very serviceable.  gb4iphone, mame4iphone and snes4iphone run at less than full speed on this first generation iPhone.  But the best part?  Many of these emulators support a Wiimote for gameplay!  A great alternative over the soft, overlay buttons that numb your playing experience.  These were games made for physical buttons.  Some are ad supported, but some are actually four to six dollars on Rock my Phone.  This seems curious considering the lack than legit status of the emulation community, but it’s a tremendous value depending of what side of that fence you’re on. (keep in mind you’re not supporting the companies you love with this sort of purchase.  But then, you don’t when you buy used games, either.)

Quake.  They got it running, and damn, it runs good.  It’s not as smooth as the Doom and Wolfenstein releases, but those underwent a good bit of UI design thanks to Carmack’s direct involvement.  But this is a great demonstration of what you can do.  Quake 3 is represented, but seemed even less polished, or final.

It’s just a start, and I’ll be sure to talk more about fun things I find, or attempt, with this hardware.