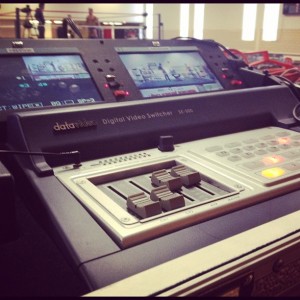 There’s a good bit going on in the last several weeks where I’ve found the shape of my work in 2012 changing, and thankfully, being added onto. While two things are up in the air as of the moment, one opportunity I was happy to be a part of was PWO in Parma, OH this past week.

I had the fortune to be tapped to help out with a video production that had to be thrown together within three days. Considering, I was pleased with the results and love knowing I have another month to narrow down the bugs that came down the pipeline.

We used a datavideo se-500 I was going to buy anyways for the upcoming work next year, but was pushed to get this thing together a little bit quicker. We ran two cameras via S-Video, preserving widescreen for Sportstime Ohio’s edit of the show. Audio was a mic set out for commentary. The very same used for interviews at NYCC or during Unsung. Ambient noise was intended to be an old Canon miniDV cam mixed real time thanks to the se-500’s mini-mixer built in. All pushed via S-Video at another higher end, but still consumer, Sony MiniDV cam I use to interface the Wrestling Mayhem Show and AwesomeCast cams to Wirecast, Firewired to my Macbook Pro running QuickTime X for capturing the mixed show on top of recording tapes in the Sony and each camera ringside and hardcam.

And thank goodness for redundancy…

Ambient Audio: I think it’s a connector or my camera, but I didn’t notice until we had the louder crowd noise that the audio on this channel, thankfully separated from commentary, kept cutting out periodically. Like maybe from a peak. Luckily, we had the camera tapes, and I spent some time syncing the hard cam tapes to the edits the next day.

QuickTime X Fail: While it seemed rather reliable for most of the previous week’s IWC Hard Cam capture live, it started to choke right out of the gate. PWO recorded four 45 minute episodes that night. Of those, two were captured in whole. One choked at the beginning, but captured the rest. One was a complete scattered capture mess. I can’t tell on the fly if it’s a choke on frame rates or not. I’ve been capturing tapes using this method the last two weeks with little issue. I’m chalking this up to letting the laptop sit there in Quicktime for a few hours. Perhaps cleaning out my often stuffed hard drives and my just completed RAM upgrade should help.