Finally, a blog that isn’t an advo for one of my projects…

I thought it would be somewhat interesting to talk about how my first experience DJ’ing went since a fateful day in high school at the Language Clubs’ formal dance that kinda sucked.

So we were approached to play a show in Speers, PA at a private party a collegue from wrestling was throwing. He was looking for live entertainment and throws some crazy parties. This guy, let me tell you about this guy. His christmas party we attended (his second of the season, a week after the New Year, and Vimal attended with us) was like walking into a Christmas tree. The Halloween was no different. His front yard was like walking through a haunted house-field.

Well, a week down from the show, I get a call that the DJ backed out. I did what I could and hit all my contacts with equipment with little luck. So I considered the spare equipment in my basement and said what the hell. Let’s take an assessment here…

2 Pioneer speakers from a home theater system (given to me by my boss)
1 box speaker from an ’80’s era stereo
1 JVC home theater amp (given to me by my more immediate boss)
1 5 disc CD player (just in case)
2 laptops
1 portable hard drive with my 14,000+ song collection
1 4-channel mixer from the studio (for CRAP/Mayhem Show recordings)
3 wireless mics (for CRAP performance, and one “just in case”)

result? Enough music energy to fill a garage and front yard of 60+ party goers with some musical energy. Fantastic. One laptop was to run the music via itunes and my packed portable hard drive. The other to network (via firewire) and preview any tracks we weren’t familiar with before putting in the play list. Laptops and mics fed into the mixer, then to the amp. 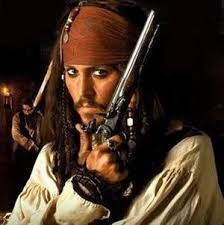 It wasn’t the fanciest of setups, but it served the party well. And we even did our CRAP set on it. And at the end of the night, someone wanted our card to get us in the future. Maybe a nice side business here in the future?

The party was fun overall as well. Great spread on food, treats, costumes, a whole setup of costume contests, etc etc. It was a nice, non-alcoholic kind of party that you could take your kids too. We even got to talk with Captain Jack Sparrow!