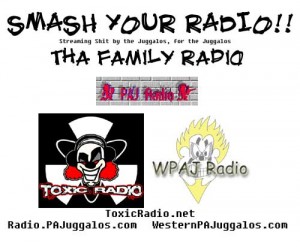 I’ve talked a lot over the last four years about Podcasting. How to do it. How to make it worth it.  I realize that I had a little practice before we got into this thing called “Podcasting” and already had a great community behind it.

I can’t remember the timeline.  I think “Assassin” from over at PAJuggalos.com invited me to have a show on his fledgling streaming radio station.  Eventually, we had at least three seperate “stations” and I was “managing” DJ’s from as far away as California.  Until this day, I know a guy named “Shady Killa” in Michigan, Fat Tony from Western Ohio, and “DJ Elf” from California.  Some names still on my Myspace list to this day.  Some I actually had the fortune to meet at the Gathering of the Juggalos over the years.

Our method was simple enough.  I, like my cohorts, setup a ShoutCast radio stream, and managed it through that great program called Winamp.  I had reservations at first, y’know, since I’ve always hated the sound of my own voice.  But I endured for some reason.   The server was setup.  Schedules were made.  Streams were up, down, disappeared.  DJ’s came and went, inexplicably.  But there were always a good four or so that ran regularly over the time we did this.  Auto servers were setup, which was nice to listen to throughout the day. Man.  It was really nice when we didn’t have to worry about these “streaming copyright” issues so much.

We managed about 15 simultanious listeners on the server (thanks to that blazing Comcast Cable speed for 2005).   It wasn’t a lot, but it was fun to max that out, and open a chat (we experimented with AIM group chats, Java Chats, etc over the time).

At some point, I decided to get on the mic after Monday Night RAW and talk about it.  (I was about out of school and working on that job/career thing, so I had some time on my hands.)  And eventually, the Wrestling Mayhem  Show was born when we discovered Podcasting.  This is why we have been big on the “raw and live” format that we hold to this day.  Our show was born on the live element and the interaction, so we’ve been practicing this policy longer than most realize.

For 8 years, I’ve run a site called WesternPAJuggalos.com. A fan site for “Juggalos”. Fans of Insane Clown Posse and their line of music. On November 15, I’m closing the site to make room for future projects. So I’ve been inspired to create a countdown after talking to some people at Podcamp Pittsburgh 4 that were in similar situations.