I’ve thought long and hard about what game really was the best ever.  I hate picking a best ofs of anything, to be honest.  What criteria do you pick?  I’d pick Metal Gear Solid 2 as the first game that captivated me with it’s delivery (having missed MSG on PS1).  Bioshock nearly beats it in atmosphere.  Guitar Hero was a complete game changer, making the party game happen as I’d hoped Dance Dance Revolution would have.  But we always go back.  Back to our child hood.  The games that stole us away from our school work.  The game that you spent all your time on, when you had all that extra kid time.  Chachi went with a classic that we still enjoy sequels of on today’s consoles that still deliver a chillingly effective storytelling element that’s evolved and revolutionized over the years.  Mine.  It hit an early peak, but an important one. 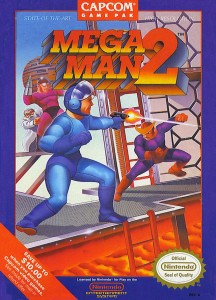 I found this one at my local Jamesway.  Maybe it was Muphy’s/Ames.  Who knows.  That first ten years just blend together.  But this was a game that drew me in by the cover art. And that’s all you really had in those days.  Look at that.  He’s on a platform, fighting two colorful bad guys.  Brandishing his…gun?  Not an arm cannon?  What’s up here?  Well, art aside, this was the game to have.  You pick from eight levels, throwing the idea of linear gaming out the damn window.  The power ups, massively different levels, and the menacing Dr. Wily.  All this and it was accessible! 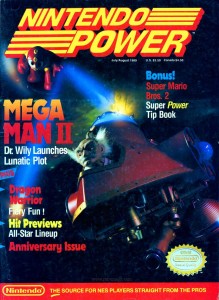 This game owned my live for a time.  It was in my Nintendo Power magazine every month.  I had an interest in drawing the character art in a small notepad I carried at the time.  Surely, this was a game that spawn my addiction to gaming.  To the point that everyone thought I played video games all day, as I think that’s all I spoke about, and always had the latest Nintendo Power or GamePro in my bag.

The music.  Oh those tunes.  Just for fun, we’ve found ourselves in the office playing “guess the boss” games.  The NES was when music started becoming crucial.  The system had an amazing setup for audio that included interesting use of effects.  Every video game cover band worth it’s salt has a Mega Man cover in it’s repertoire.

Also astonishing was the size of the bosses.  Never did we have boss battles that took up so much of the screen.  The revelation that you were in a hologram room, stars flying by, and Dr. Wily was an alien?  This was also the first game I got to beat to see an amazing cut scene (was Mega Man dead?  Self imploded?  Or did he just leave his helmet behind) and finally see all of those “funny names” from the Japanese developers.

It’s a big statement, I think, that after all of these years, and the small strides this series has made, and huge gambles that may not have paid off (I disown Mega Man Legends from existence)  we have gone back to the NES 8-bit style graphics from Mega Man 9, and soon, 10 on the digital distribution systems.  Yes, the boss names have been too rediculous since about 1993, and it’s hard as all hell (so I’m told), but dammit, it’s the Mega Man you love!