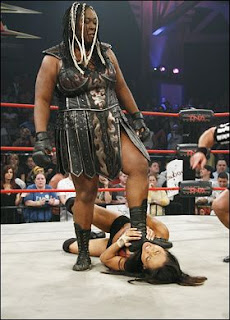 So it’s been over a year since I proclaimed “Why TNA is Good For You“. Last night, I enjoyed maybe the better TNA PPV I’ve seen in a while. And we were hit by another good one a few months ago. (I’ve been catching them sparingly) After Lockdown in Philedelphia, let’s see what we have.

TNA Does what WWE Don’t.

WWE does not care about it’s tag division. This was more than obvious from the highly anticipated “unification” match being bumped from WrestleMania uncerimoniously. But what’s this? TNA had two tag championship matches on this show? With buildup to each? The fed has been lucky to have one tag match every couple of pay per views.

Divas. Knockout. There’s a difference. As I discussed Sunday night in the chat, when you sit and watch a women’s match in WWE, there’s not much sticking out. Almost every blonde bimbo in that company is interchangable, and are devoid of personality. The better exceptions include Nattie Neidhart or Beth Pheonix. Even Gail Kim has been relegated to a mute wrestler that sort of showed up on Smackdown one week. TNA has women that stick out. That have personalities, talent (most coming from the indies instead of the modeling agencies).

The Old Guys Won’t Go Away

When you’re building a company, or attemping to make the most money you can from merchandise, you’re going to go with the “proven winners”. The Kurt Angles, Triple H’s, and Stings of the wrestling world will always have that one up. This is why we always see our beloved wrestling companies tread lightly on change, and maybe “dip their toes” with guys like CM Punk and Jeff Hardy for brief periods. Remember, Edge has only a couple week reign for his first major belt. Now look at him.

So if you’re the sort of person that reads this blog, or listens to my show, this last scenario is not for you. But tune in for the young guys, and divisions you’re not getting with the big boys.