Back around Christmas last year, and going into this year, many saw my disdain on Twitter as I fought to return my Internet service that was shut off due to a double billing issue.

Well, after my frustration in WWE RAW not being internet accessible, and missing out on all of those Penguins games, I decided to shop around and found the Verizon’s FIOS TV was the best deal, considering I already had the FIOS Internet and telephone service to bundle with.  So far, I love the service, after a night with playing with the box and such.

But dealing with Verizon seems to continually be an abusive relationship. 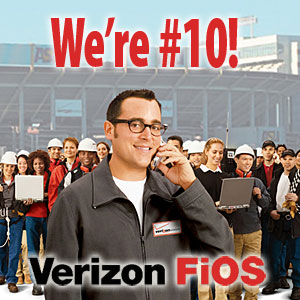 Verizon doesn’t know what it’s doing across departments.   When I call about my service installation not calling me, and you’re offering me a Droid, something’s wrong.  You haven’t provided me with the service I’m attempting to obtain, and you want to tack another on?  Then I have to be shuffled across three different departments every time to not get the problem fixed.  I called twice about these issues, and was asked twice if I wanted free HBO and Cinemax for 3 months, which I agreed to the first time.  Now that it’s finally installed, I was surprised to see I still didn’t have the premium channels they offered me.  I’m almost afraid to call for the chance that something else gets screwy with our service.

But it’s not all bad.  I love the FIOS TV service, and the price, so far.  The internet has been tremendous, with no non-billing-error-related downtime to speak of.  Both aspects that Comcast consistently failed me on during my time subscribing to their related services.

I’ve had similar services with AT&T Wireless.  Sometimes the customer service guy on the phone doesn’t exactly know what’s going on with your account, or even the services they offer.  But I’ve had limited issues with them as a service.  In both cases, as with every service provider, tread lightly, and always double check anything they say.