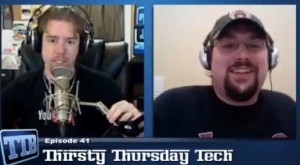 I’ve mentioned before that I’m to the point to start experimenting with this show a bit more, and this week I started the process with a “Guest Musical Direcotr” show with Will Rutherford, who’s been doing an amazing job at picking music for a long time at the Wrestling Mayhem Show.  Since the network’s grown, and we have a dedicated place to dedicate to music like this show, we’ve decided to eliminate that aspect of the wrestling show.  We have a good talk about where you can find alternative music online.  Hope it gives a bit of flavor to the show.

I like to set myself hard deadlines to get things done.  In that regard, I invited Doc Remedy and Mayhem Missie to return to the show this week so I knew I’d get the guest couch side of the studio in order.  Unfortunately, a few errands beyond my control the couple days before (meetings and a round tripper to Erie.  Whoop.)  All this, and an old high school friend stops by today out of nowhere.  It was hard, but it got together.

And it was grand.  We were pushing the limit with 6 on air voices (3 in studio, 3 on Skype), and Doc Remedy was in rare form, taking the wireless mic to the bathroom with him.  Oh, and we talked about wrestling.  Another classic.

We swapped things up again to a 10 PM time slot, and I think I lost my mind in the process.  Stephen of The Tech Buzz joined us, and I attempted to toss in Chachi, but some quick configurations to get the in studio couch cam together for the Mayhem Show goofed some of my setup.  But we had audio for him, and it was all good.  The show seemed to come off pretty well until I…forgot how I ended the show…But that happens.  Moments like that is why I believe in pushing the raw, unedited versions of these shows…

Also, I had the chance to pop up over on Stephen’s Tech Buzz Thirsty Thursday to talk Podcamp Pittsburgh!  Check out the video over here!