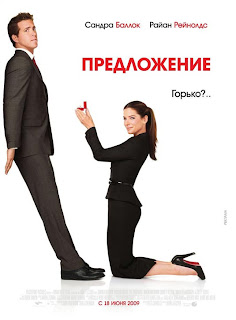 Man, I love free previews. A couple of years back, I was lucky enough to attend the Myspace screening of Harry Potter, and that was a trip. Recently, my coworker showed me a fantastic Facebook group that lists some advanced screenings in the area.  So I packed up the wife after work and told her we were going on a date.  As I concealed my printed email “pass” so she thought I had some stroke to get her into a movie showing a week and a half in advance…

But I digress….
The movie was your typical fair.  Actually, something of a role reversal for Sandra Bullock from her Hugh Grant flick I slept through.  Or Bridget Jones Diary.  Really, I guess any Hugh Grant vehicle.  But the difference is Ryan Reynolds not being as much of a British tool.  Reynolds, positioned as her “Executive Assistant” underling, is fantastic in in being the workaholic trying to get ahead, and the one liner once he gains some sort of power over his boss in her unfortunate situation with immigration.
Things get sticky when Sandra Bullock’s character, a Canadian immigrant, is less than astute in her paperwork to work in the country.  Her Visa is denied, and she pulls Reynolds in.  The majority of the film then takes place in Alaska, which I guess is like Canada 2.  But still.  This is one of those postcard pieces that makes me want to move  to Alaska when I’m tired of civilization.  But Canadian immigrants?  I raise some  issues.  Last I knew, we couldn’t go and work up in the Great White North very easily.  did Sandra Bullock get in on her good looks?  Her agreeance on performing a semi-nude scene, finally?
Also, sort of funny since Ryan Reynolds is the Canadian Native in real life.  Oh,  Canada.  The talent you export…
Also, considering the last two times I’ve seen Reynolds in the last two months was serving tables and being ‘effing DEADPOOL!!!!!
I enjoy a movie with a great supporting cast.  Especially one as surprisingly recocnizable as this.  Craig T Nelson (Coach), Betty White (Golden Girls), and Mary Steenburgen (Back to the Future 3) filled out the visited family.  I never imagined Betty White as Native American decendant (neither would I have my own grandmother-in-law, either), but this continued my reminder of how funny she is after seeing her on My Name is Earl earlier this season.  But the surprises, of course, are Aasif Mandvi from the Daily Show and Oscar Nuñez of The Office in his many…roles…
Finally, I have to say.  I think I found a friend for Bijou. Is this not the second cutest thing you’ve ever seen?