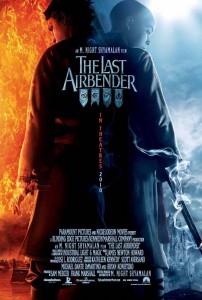 This is the part where I sound like the worse of fan boys.  But there’s something missing here.  Something that got me into this series in the first place.  Something that I’m amazed that someone as accomplished, Happening-be-damned, as M.Night Shyamalan could have missed. I’ve never been so fan boy about something as this, but I’ve never seen such a great series turned into high budget slop so easily.

The Movie is Fast Tracked.

I understand the issues with basically squeezing 20 episodes of the Water Book season into an hour forty five minute film. But there was no time for anything else. Just as you get comfortable with a scene, we have another.  We don’t have time to just have a conversation about any of the issues at hand.  We’re simply around long enough for characters to spit facts, which don’t make sense unless you’re filling in the blanks from watching the series in advance.

The Character is gone.

Not just the humor, but the growing people.  I can’t be angry about certain elements and people not being in there.  encounters like Jet’s rag tag band, the new residents of the one Air Temple, and the like are victims of the time crunch.  But nothing was left to build on.  The humor lost aside from some quick spots where Sokka gets wet. Appa and Momo are relegated to cameo appearances in scenes with no character, and a badly interactive shot with Ang.  There’s no reason for these people to be together, and no chance for them to grow, which you saw plenty of in the series.  At one point, after Ang and Zukko’s fight, Ang walks out and states “You know we could have been friends” much like in the series, if I recall correctly.  We couldn’t even get a reaction shot of Zukko to see how he initially reacted?  That seems like editing 101 to me.  M. Night’s work seems to be more about characters in peculiar situations, but he seemed more concerned in getting from episode one to episode 20 with as much efficiency as possible.  Too bad he forgot to stick a generally watchable movie in there somewhere.

I’m not even a little bit angry about the multi-cultural casting as some fans are.  I don’t care if they cast a black Spider-Man (which was rumored for a time) so long as there’s a good story in there.  I’ve been a big defender of M. Night’s past work.  I took every movie at face value for what it was and enjoyed the ride.  This was such a potential paint by numbers project that seemed to get the numbers wrong.

What did you think?  Has any theatrical experience disappointed you to such anger?