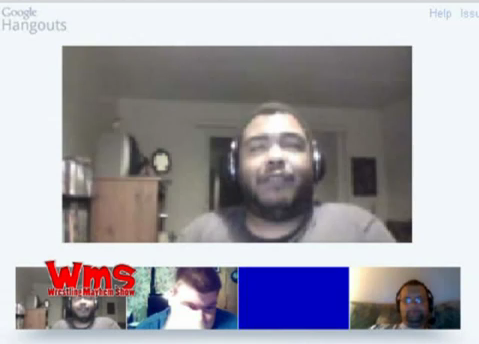 Of course, since Google Plus’s inception, it’s been something that any social geek worth his weight in USB cords has at least checked into.  I’m no different.  Whenever I see a new tool, the first thought is what can it do for my communities that I’m involved in around the media I make and participate in.  It’s always a go to to talk about it amongst other social media techies, but that’s too easy.  That’s a group that’s already inherently techie.

I love using my Wrestling Mayhem Show audience and friends for these experiments.  While my AwesomeCast circle are typically Mac users and work in the industry in some fashion, the wrestling crew represents closer to “normal” people out there.

RAW is Hangout. So, the first experiment was Google Hangout.  This had become easy to get into after a few attempts amongst friends.  Years ago, we used to play with BlogTV or Ustream with Monday RAW streams.  It mostly entailed one or two of us, depending on the tech, streaming to a chat room to comment on the show.  With Hangout, this became a more interactive experience.  Getting around 5 people in one of these watching the same program is the next best thing to everyone being in my living room.  There are small variations in the streams we all get from our cable and satellite providers, but we still get a group of people all commenting on what’s happening from across Pittsburgh, other parts of PA, and Texas.  It seems to enhance the experience.  It doesn’t matter what you like.  When you’re in a room of like minded people enjoying the same content, it’s a grander experience.

Pay Per Thread. The second experiment was “what do we do during Pay Per Views.  Hangout doesn’t feel to make sense.  Typically, people are paying upwards to $50 for these shows, so the RAW method would be distracting to what should be a pure wrestling show and you don’t have commercial breaks to generally converse.  I opened a thread on the designated Wrestling Mayhem Show account, which you can view here.  Not only did it replace the rampant twitter comments no one out there would care about, it served to include a group of our friends that ended up going to a Buffalo Wild Wings as they participated via their phones.  The thread updates live as submitted, a la Google Wave, and when I saw something particularly interesting, I could mark it with a “+1” to bookmark for that week’s show to bring back up.  The whole conversation worked out to about 205 comments.  Not too bad.

Mayhem Hangout Live. Lastly, the obvious choice was to includ Hangout somewhere in our shows.  Again, staying with the wrestling crew, we had our normal crew in for Wrestling Mayhem Show 279, so after our break, I loaded up the Hangout to let our usual live crew, and sometimes fan guests, fill the room and “hangout” in the background of the show on the monitor.  After we had whatever conversations that were earmarked for the week, we opened up the Hangout, reminding our extra new guests to be civil, to bring up  anything we may have missed, or comment on what we’ve talked about.  It was a great time, and created a good bit of mayhem, as is our name sake.

This Google Plus thing has just gotten started, and the “consumer grade” tools they’ve unleashed on the internet are already interesting, and Google insists this is only an early preview of the service as a whole.  Hopefully we see them work out their company and fictitious name policies, and we see even more growth in the service, and how content makers can grow with them.