A couple of months ago, I started a little bit of a personal Podcast to kick my day off and get my brain moving.  For me, it’s been hard to stay up in blogging, since I’ve felt I’m betting in front of a microphone than a keyboard to express some thoughts.  It’s been a fun challenge to get some thoughts out.

To continue to try to get that out there, I’m going to start posting my Podcasts up here.  Here’s the first: 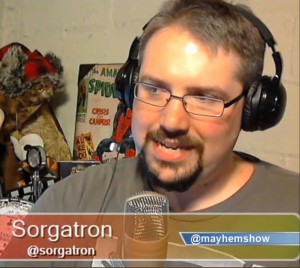 I started Podcasting in 2006.  This morning, I take a look at why Podcasting works for me, and think back to the first Podcamp Pittsburgh a little bit.

This week, AJ joined us from a car for the show.  Really didn’t know it at the time.  We discuss the new format we’re attempting to use Google Hangout to bring a bigger roundtable discussion to the Wrestling Mayhem Show and how I’m working it into my current Wirecast setup, and hope to get more efficient at it… 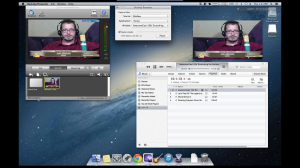 In the past I’ve written posts on what I use in my podcasting and production environments.  This is continually evolving.  Here’s the latest from my view Tuesday nights! So how does it break down?

A lot of what you see has been recovered, second hand, or repurposed.  Podcasting doesn’t have much of a budget in my world.  I use it for a bit of “proof of concept” that we can do something with quality and regularity.  It also serves as an experimentation ground (hence all of the extra equipment).  I could get into a bit more about the hows and whys I still do the Podcasting after all of these (7) years.  But that’s a post for another day… *Isn’t that panorama cool?  I love the feature on my iPhone.

I often don’t think. I just do.  And what I do is Mayhem.

That’s what I’ve done for 300 Tuesdays on my life.

300 times I probably didn’t get the sleep I should of.

300 times I discussed wrestling and people have thought it important enough  to listen.

300 times I had a good time with good friends.

300 times I didn’t care what people thought of my passion.

Here’s to another 300 episodes of the Wrestling Mayhem Show.