There was a simpler time. A time where the Stoke Monkey was 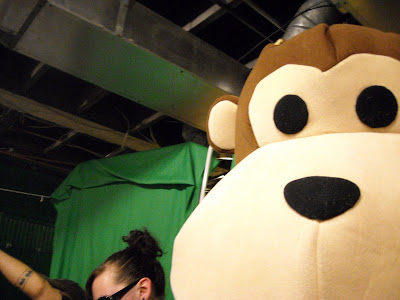 It was simple enough. The Stoke Monkey was brought on to help with my music endeavors to rile up the fans from stage. Then he joined us on the Wrestling Mayhem Show. Things were alright for a bit.

I should have seen the signs. At Sorgstock, he was a little crazy, assaulting Girdy from the No Clue Crew all night long. Then there was New Jersey. He came back with a new, political, attitude. But the soul peering was continuing.

But who is the REAL Stoke Monkey? He is a simian man of weird perversions. He is a lieing politician in the monkey head’s body. He makes ridiculous claims he could never back up. While he distracts you with campaign videos about how much he isn’t DJLunchbox, he’s spreading more lies and delving into the scary world of New Media.

And while Stoke Monkey assaults and attacks my person, he makes sure to sidestep me to call out Stephen Colbert!

But finally, I’ve had enough. I’ve had a bit of footage that I’ve been sitting on ever since the 4th of July. The most patriotic of holidays! And how does the Stoke Monkey celebrate his patriotism and freedoms?