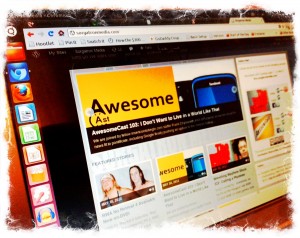 For the longest time, I’ve been searching for the answer to my woes. The woes of tech supporting my family and coworkers’ PCs. The obvious answer, and one I try not to deliver as a fan boy, is to buy a Mac. A stiff issue for most incomes, unfortunately. It’s my preferred work environment, and the home of my preferred tool set, but that doesn’t mean I should impose my aluminized will on others.

Many of my machines I’ve resurrected for the studio ranging from single core Pentium 4 machines on, have found some new life by dropping some Ubuntu love on their hard drives. Killing the overhead something like Windows XP (still the preferred Windows edition of Sorgatron Media) and all of that crud it loads.

Finally, I had a chance to experiment. My mother in law has a Dell computer, a long in the tooth Pentium 4 that’s been loaded with unfortunate toolbars and tag alongs that usually happen when you download anything for the internet for Windows. So I loaded Ubuntu (104 LTS, I believe) when up last month.

Upon visiting, I received my first report.

She went on to explain that the printer combo that was plagued by issues since a driver update now works correctly under Ubuntu. Everything is so much smoother. The only drawback was getting used to things being in different places like the window exit buttons and the apps. ( Ubuntu stores menus across the top, much like Mac OS X, as opposed to the Start Menu.)

And the nice part is when she does. Or across something that could require Windows based software, that’s all still right there in a separate partition, but she is learning where her files live on the Windows drive so she can interact with them in the Ubuntu side.

While I still eye up and comers like Google’s Chrome OS laptops and desktops, I think so many people with 3 year old computers may benefit from something like Ubuntu being tossed on their system. Not everyone needs a new computer when theirs slows to a crawl. And I hope we can get away from the disposable nature some take with computers. When you strip your system to do just the tasks it wants you to, and not everything Microsoft and Dell and Macafee and that toolbar that piggybacked on your system cleaner all want to decide the attention of your computer’s resources.

Ubuntu can be found in several favors over at Ubuntu.com if you want to look further.