At the recent Podcamp Pittsburgh organizational meeting, and was asked the question of what I wanted to tell people about Podcamp.

I suppose there’s a bit of something that I missed from back in the day that is fullfilled by Podcamp and all of the people I’ve met there that have extended from it. 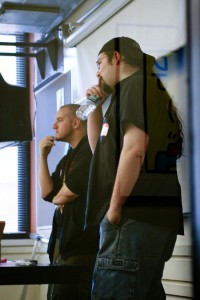 Back “in the day” when I only bounced around my small town, there were a select few people that I could have some really interesting conversations over a horridly mixed cappucino at Perkins that would make my mind race.

This first was Matti. that would be his last name, but much like me, his last name was his identity. While Matti wasn’t the most social in class, as I found out, he was one of those people I didn’t hesitate to say hi to the first day of school. He dabbled in Linux, the only true alternative for his insanely analytical mind and for breathing new life into his 200 Mhz Pentium PC long after I tripled my processor across three machines, two of which I built myself. This guy had a different way of thinking about things. He wasn’t conditioned by the typical social misgivings of teenagers in the social rat race. Views on society, computers, and religion would last all night. He’s now married, became a trucker, and is probably the happiest he could be, from what I can see.

The second was Chris. I believe a year under me in school, and a fellow band geek. The last was this fellow named Dave, if I recall correctly. Both had that programmer mindset. The latter actually going to school for it, and often visited on the weekends (again, if I recall).

The point is that these were the people that stretched my brain when I was younger. The conversations that went beyond girls and video games. The conversations that changed my way of thinking to prepare me for what I do today, and that hunger to do so much more. When I go to Podcamp, or sit around a table at Finnegan’s Wake with colleagues in web site design, programming, and the like, we get to talk about ideas and thoughts that keep you on your toes and help you pick up on what you may be missing.  I might not be active with web development anymore, but I love talking about it.  When I go to a Refresh Pittsburgh, or TweetUp, I sometimes find my mind on an informational blowout.  I love to absorb information, as demonstrated by the mass of podcasts and blogs I digest in the week. And all of this is extended with Twitter and our circles of blogs and comments.

So how do you find yourself stretching your mind?