So, as I wrote before, I needed a vacation. Like, a real vacation. As of about a month ago, we started planning to hit the New York Comic Con. I feel renewed. I feel refreshed. Aside from a few factors, it was an amazing weekend.

We set out Thursday night after work so we could seemingly get an extra day in. We set out with 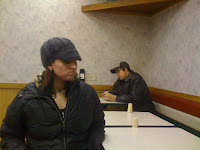 Missy, Chachi, LB, and V-Ron. It was a long, interesting, night trip. The traffic was light (though truck heavy), sometimes pantsless, sometimes experimenting with our own concoctions, but passed decently enough. We hit Mad Mike’s about 3 in the morning or so, and had an excellent time attempting to find some parking in the Bronx. 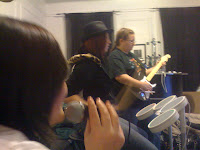 Friday was low key, amazingly enough. the Mad One had a function to attend, but the Mayhem Crew discovered the glory of WWE 24/7 and scoped some classic 90’s wrestling, then felt WrestleMania 20 was worth a watch. We were finally joined by Miss Ashley from New Hampshire (NH’s #1 Night Radio DJ, I might add…) and the partying finally commenced!! We broke out the Rock Band and Guitar Hero and realized this was way more fun than going out to the planned kareoke bar that night.

Saturday was interesting. This was the big day to visit the NY Comic Con. But the the sleeping 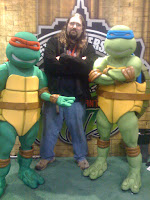 beforehand hadn’t really happened for much of us. I honestly had no plans or expectations for this thing. I planned to attend the Penny Arcade, Robot Chicken, and Venture Brothers seminars. That was it. Unfortunately, the two Adult Swim sessions were too insane with lines to even attempt. But I found so much better. We happened across the Penny Arcade booth as they were signing autographs, and they were really cool. Kevin Eastman, TMNT and Heavy Metal honcho, was signing autographcs on the Ninja Turtles 25th Anniversery booth. He was really awesome to talk to for a minute, and was kind enough to do a quick tag line for the Mayhem Show! Talbot, him, and a few hands were going through an advance copy of ToyFare with some of the more awkward TMNT characters (the moose that was the mountie?) and questioning what the hell they were thinking back then. Fantastic. 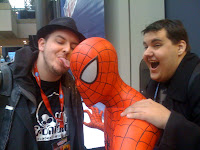 Penny Arcade’s session was fantastic, and after seeing what pain those other sessions were, I just stayed in the same panel room for Marvel Animation (saw eps 4 of the new Iron Man toon, early Superhero Squad intro, and some interesting news about upcoming movie possibilities) , a session on submitting television pilots on the cheap, and Marvel Digital. The Marvel Digital panel included an appearance by Joe Quesada, the current Marvel head honcho. They talked about the development of the digital comics (which have me very intrigued) and announced for the first time the new “motion comics”. They are taking Astonishing X-Men (had a trailer), and all of the new issues of Spider-Woman, and making them video with the original artwork moving and voice acting added. You can see the AXM trailer here. 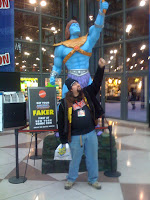 I managed to get back to the floor, much after the rest of crew tapped out due to lack of sleep, and had even more awesome experiences. I was pulled aside as I wandered to be interviewed for some small segments on Cinemax. Wearing my brand new Wrestling Mayhem Show shirt, I thought I had a pretty good back and forth with Dave Hill, the host. I know the producer was laughing a few times, so here’s hoping. Let me know if you see me between Forbidden Science and whatever softcore is on after it. I also had a chance to meet the guys behind a comic called “Headlock”. Stay tuned to WMS for that, though.

Aside from that, a few things that caught my eye included watching playables of Ghostbusters, Legends of WrestleMania, and getting my hands on Grand Theft Auto for the Nintendo DS. 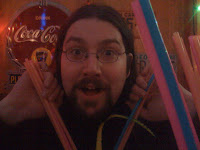 After I finally got back, we hit Brother Jimmie’s, the NYC trip tradition! We got the fish bowls, that mystery concoction in mass amounts. I contend that they were trying to kill us by giving us two more fishbowls on the house after we killed 7 amongst the 8 of us. But there’s not much to tell that can’t be told in pictures…

Sunday, we hit Central Park, FAO Schwartz, and the Carnegie Deli. Central Park was busy, and a great day for a walk. The Deli was interesting. Yes, it’s the place from the Hanukkah Song, and the pictures of the famous people on the wall was amazing to look at as we waited for our awesome food. I was iffy on the absorbent prices for the sandwiches, until I saw the pile of meat you receive. Here is Chachi tapping out. We then returned to the Mad One Lair, ordered some real New York pizza, and scoped the actually decent TNA PPV and watched some Hulk VS and Ninja Turtle movies until we passed out.

And today, I returned home after a great detour through the Pocono’s, passing the Scranton exit (where The Office takes place), and had a great time on the way back with Missy and Chachi Twittering and DJ’ing on the ipod.

I think I’m going to make a point to plan these extended vacations, personal days allowing, every few months. Especially with the work load these days, you just don’t get to “get away” like that. My stress level is the lowest it’s been in over three months, and this is demonstrated in a few obvious ways. I don’t know what the next few months may hold for me, but as long as I have getaways with good friends like I did this weekend, I know I’m going to be fine….

A big thanks to Mad Mike for helping us experience the city, and putting up with us for four days AND the awesome “Mayhemopoly” that I will be writing about later. And a what’s up to Ashley, who’s fast becoming a great friend.

Check out the videos and pics! I’m sure everyone else will have some on their respective pages soon enough. I know Chachi does!

And now back to your regularly scheduled blog posts…