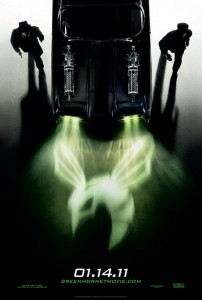 Once again, I had the fortune of schedule and a well placed email to head out to see a preview screening of The Green Hornet.  I was surprised at how early this one was, being almost a month in advance, from what I interpret as being a pretty big movie for this time of year.

I remember the Green Hornet for it’s short lived series in the 60’s with Bruce Lee, and mostly because it crossed over with Batman at one point (which I enjoyed greatly in reruns after school).  In case you missed the single season of that show for reference:

If you’re old enough or rerun-abled to remember this, forget it.  And I think that’s where this movie has a bit of an advantage for reinvention.  No one remembers a property that hasn’t had a new production in over 30 years.  Which is good, since Green Hornet has somehow become a comedy.  Just imagine Seth Rogan as a super hero.  Not playing a character.  Just kind of being Seth Rogan in a mask.  And if you’re a fan of that concept, go with it. The flick had plenty of laugh out loud moments, plenty of people being pulled through windows, and just a lot of fun.

Only weird spot was a few fight scenes that sort of get a bit acid trippy. Upon the credits (and later, after seeing the preview in front of Tron Legacy) this is obviously being pushed for the 3D gimmick plaguing movies these days. Either way, Green Hornet was just as enjoyable as a 2D experience.