And the usual disclaimer: I’m a big fan of the TWIT network, Revision3, and the CNET podcasts.  And they serve as a lot of inspiration for my work and a direction it can go.  But there’s always been something missing.

Yeah, I may have been over exposed to Leo Laporte over the years.  He’s one of my favorite pundits and surrounds himself with an amazing assortment of people.  Revision3 has some amazing productions the cohesiveness of their presence as a network of shows is incredible to watch on a lazy Saturday on my Boxee setup.  I’ve watched CNET since they had shows on Sci-Fi Channel in the late ’90’s, and returned when I discovered Buzz Out Loud and The 404 in recent years.  (thanks Rob and Jen!)  And it wasn’t the fact that I’d filled the background noise of maybe 50% my work day with Leo’s shows.

All of these shows are run and filled with opinions of journalists.  Tech journalists that have worked their way to one pillar or another to get on the radar of the tech press elite that run them.  When you hear these people talk about their phones and how well they do or don’t work for them, it feels unrealistic.  They’ve seen too much, and have had there hands on quite a bit.  When a show member talks about juggling between his Evo 4G and iPhone 4, it feels like it has less weight to me.

The other thing that’s bothered me for a long time is the failure of representing middle America.  Maybe I’m jilted by being in middle America, and a middle America where it feels like there is a lot going on. 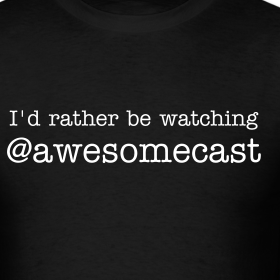 Granted, we are getting our information from our hotbeds of information, since much of the “main” tech industry is in California.  Experiences in these places vary greatly from the rest of us.  In Pittsburgh, I’ve hardly had a problem with my AT&T service from a coverage point of view that I wouldn’t expect from a carrier.  I understand the inability to get service in the middle of nowhere in Western New York when I visit the folks, but only a smattering of spots on the highway are without service in Western Pennsylvania.  Yet, the tech media is littered with opinions based on the worst case experiences of New York and San Francisco.

AwesomeCast, sans the name Rob provided, has been something in the back of my head for a good while.  A show where we can really tap a pool of real people and creators.  Something different than the jaded pundits and critics of the larger shows.  IT Professionals that love tech.  Animators that make comics, and with any luck, people building new businesses that aren’t located in a coastal city.

But even with the mass of content available, there are plenty of other angles not being properly adressed.

What are you missing?