It was yet another fun filled week of podcasts via Sorgatron Media.  And the Skype bug hit us on a few fronts to keep us on our toes.

Originally scheduled to be joined by Andy Quayle, we had some trouble hooking that up.  For some reason, we weren’t let aware that he’d be online waiting for us twenty minutes before the show, and when we finally got it semi-sorted out, we had some issues smoothing out the connection.  Luckily, Chachi was on hand to chat it up with us about all the tech news.  This also marked the first week we had to deal with a light flow of real obvious news to talk about, or a discussion topic to fill the latter half.  But things came off pretty well, and I’m pleased with the conversations we had, including a bit of reminiscing about the old days of PC tech. 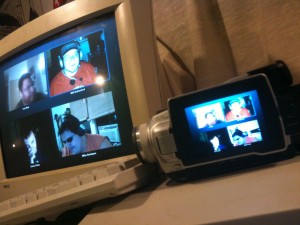 We were back to what’s become the typical Skype trio, maximizing that Skype Beta setup.  We also made another venture in our “fan roundtable” initiative.  We had Rizz a few weeks back join us, and this week, we had Hotwheelz on.  It’s been great to get the guys involved we see in the chat room every week.  And this week, everyone was great to talk with.  I even got a little heated by the constant beat down of TNA.  Some great WMS Gold stuff as well.

We had some trouble here as well.  ‘Wheelz had requested me on Skype, and I did the same back, but again, like Andy, we couldn’t find him on our list as online.  I consistently received a “user hasn’t approved you” when I tried to call.  This is an odd occurrence.  I partly atribute this to multiple instances of Skype running over maybe three machines, or a bug in the beta we’re using.  Something to keep an eye on.

We had another BoinxTV failure, but that doesn’t bother me anymore so long as the Ustream is recording.  I’ve been rather impressed with the quality of those recordings as of late, and don’t sweat using those.  It’s still unfortunate that I have to go through my process (download FLV, upload to Youtube, who converts it to .mp4, which I can then download and edit.  I haven’t found a converter that handles ustream’s codec in flv)  The issue with the BoinxTV sofware switcher we’ve found is that when that program crashes, we lose everything that’s been recorded in that session.  Poof, into thin air.  I’ve searched for a recovery method for that without any luck.  Here’s hoping the new updated fixes some of that.  One consideration to take some of the stress off of the program is some cheaper switcher solutions I’ve been researching.

Another classic show, but I’m working on some strategy for getting new interviews.  Thank you “classics vault”.  Really happy to finally see Whitney Peyton’s new album out for free download, and King Frown’s track on there we had so much fun with last week on WMS 225.