For about 6 months, I’ve found myself catching up on a LOT of comic books.  A newfound interest, and a need to play catch up with all of those years that I determined comics were, unfortunately, something I could save some cash and not partake in.  But these days, I’ve discovered the beauty of collected works, and found some pleasant surprises.   The first I endeavored into in the Marvel Universe was Civil War.  In the reaches of that series, I found hints at the Planet Hulk/World War Hulk series that transpired during/after this period and had to jump in on it. 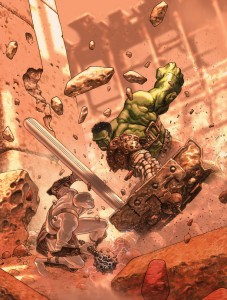 Planet Hulk was a very pleasant surprise.  It takes a good bit for a book to make me buy an alien planet, and this book helped a good bit.  My head is still spinning for jumping into the Green Lantern universe thanks to Blackest Night.  But you get dumped into this world right along with the Hulk, who’s been shot off in a rocket ship, tricked by the Illuminati (a secret group of heroes including Dr. Strange, Iron Man, Black Bolt, and Mr Fantastic) and diverted to this world by accident.  Surprise.  It’s a world in turmoil and a barbaric, Roman Coliseum loving culture with an odd case of high technology.  Sort of like He-Man.  Hulk fights his way through the ranks, bonding with the “misfit toys” of the culture, and forming a friendship known as the Warbound.  The group, led by the Hulk, leaves servitude, and sees fit to tear apart the kind, ruling the planet.  I wasn’t aware of the Hulk’s intelligence at this point, and had a problem, at times, with understanding just where his head was at.  Hulk varies from raging lunatic, to quick quipping fun good guy in a fight.  That aside, there were some great relationships and personalities going on here.  You even felt sorry for the Brood of the group, who’s homeworld was destroyed, stranding it.  The threads of the planet’s culture and prophecies of the Skaarson were fantastic, playing to the situation in much akin to Black Freighter seemed to Watchmen. 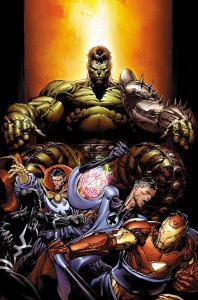 World War Hulk goes down after the cataclysmic ending to Planet Hulk.  Hulk thought he found his place, and happiness, until something happens to change that.  (attempting some no spoiler writing, here, ok?)  Hulk lost the prospects of a family, and blames the people who shot him there.  So he shows up with his Warbound, and a small army of bug people of a few sorts (though I don’t remember all of the ones that pop up from Planet Hulk.)  Much like Civil War, we are treated to stories from a few different sides and perspectives.  Hulk’s ultimatum is played throughout the Marvel books.  In what’s becoming one of my favorite books for these sorts of crossovers, the Frontline series, dealing with newspaper journalists, and other normal people, this time a cop assigned to help one of the Warbound figure out who killed their robot friend, are some of the most striking stories.  Especially since the main book breaks down into a series of explosion fight panels on the other side of the spectrum.  The Champions(Angel, Hercules, et.) become Hulk sympathizers in his own book, Heroes for Hire deal with the Brood and bugs’ side plan to start a new hive for their dieing species’ on Earth, and Punisher…fights some random bug monster I never saw before with a sweet Venom tech suit.  Continuity seemed to fall out of whack when you had books where Hulk fought about every X-Man, Ghost Rider, and who knows who else, all at the same time.  Or with little reference to where.  It’s like people dropped in to get clubbed out of Manhattan just to feel included in something big.  I thought Moon Knight felt out of place in Civil War…

While the bigger event of the two series’ had it’s flaws, both, as a whole beginning, middle, and end, felt like one of the better events of the last decade.  While nothing as thought provoking as the political discussions that Civil War broke down to, this tackled the fallout of what if those in power didn’t make the best decisions.  The sum of this is probably from one of my favorite quotes between Iron Man and one near omnipotent being with an agoraphobia complex:

“I know you’re not ready to hear this….No sane person ever really is.  But it’s time to play God.”