A few months ago, I wrote about my time reading the Planet Hulk and World War Hulk series’ and how much they exceeded my admittedly low expectations of Hulk stories going into it.  Now, I find myself grateful to have read those series’ when Planet Hulk snuck up on me as a DVD release.  This week, I got my disc in the mail and insisted on watching it immediately.  I attended a panel on Marvel Animation asking if people would like to see more stuff like the Hulk VS that had just been released.   I’m ecstatic to see they followed it up. 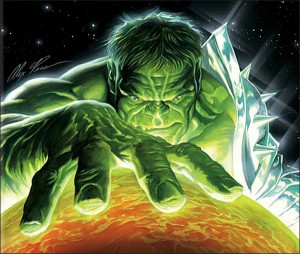 For those familiar with the story, we are introduced to Hulk waking up in the ship, triggering a message from Iron Man, and a few obscured “super friends”, telling the Hulk how they duped him into being sent into space.  Hulk promptly breaks things and gets redirected from his route to a nice, inhabited planet, to a war torn, oppressed world where he is put into servitude and made to fight in a Roman-esque coliseum.  So much so, that one viewer commented that this was Hulk meets Gladiator.  But I reckon it more to Gladiator, if everyone thought he was Jesus.  So Hulk fights through the challenges with some random, new friends, and head to overthrow the king.  The story is true to the original series in all the ways that matter, but allow for a major story arc to compress into an hour twenty minute DVD release.  We miss the little intricacies, such as Miek’s backstory, as a whole, his odd relationship with Hulk, and even his foundation of a new hive and transformation.  The Spikes aren’t referred to as anything but a secret tool of the Red King to achieve his goals.  As Panels on Pages explained, we don’t get Silver Surfer in a surprise role, but a Thor-like character with a horse face I’m not familiar with.  But still, an equally omnipotent being.

This is one of those stories that I typically shy from with the extraterrestrial nature, but the book proved to be a very fleshed out sort of culture, with a religion, prophecy, and deep history I would be willing to follow further, should Marvel decide to do so.   Especially with the Warbound, Hulk’s friends.

For those big on Hulk, this is one to get.  It’s an atypical Hulk story, where people look up to him, as apposed to the typical “how do we deal with this monster that we simply tolerate, now..” arcs of about any other story.  And certainly a more happy of an ending.  At least until they do a World War Hulk DVD…