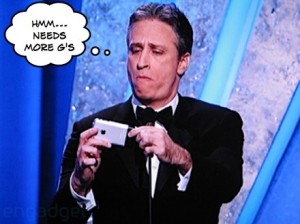 I don’t know what it is, probably my inner geek getting all crazed, but I like what’s going on in the cell phone realm right now. The amount of gadgetry is exciting, and the fact that it’s becoming more and more accessible everyday for the common person.

Now, I’m an iPhone guy through and through. I haven’t seen much use in Windows Mobile (though my friend Basick feels different about that fact). Blackberry is fantastic for what it does in the business realm, even though I’ve witnessed my coworkers frustrations with them between the Storms, physical keyboards models, and Verizon’s service not even working in our office building.  Android is an awesome alternative to iPhone.  It’s just too early in it’s development (I didn’t jump on iPhone until 2.0) and T-Mobile has been holding it back on the network side. (Pittsburgh is just now getting 3G through them).

So, if I’ve picked my side, why am I so happy?  Being on the massively winning side sucks.  Look at Windows.  And as long as the iPhone doesn’t completely dominate, there’s a reason to push it to become a better device.  We’re all embarassed to have only gotten both MMS and Copy and Paste in the last four months.  Both of these rudimentary functions that all of the above mentioned phones have enjoyed for a good long time, I’m sure.   Stiffer competition and feature sets will ensure my upgrade path will be clear, and I can migrate all of these games I’ve been playing the last year.  (I’m not willing to buy Wolfenstein yet again…)

So why are things different now?

Marketing: Android has been growing as a device.  The MyTouch is a smoother device than the G1’s clunky interface.  T-Mobile’s run of ads including Jesse James and Whoopi Goldberg are great, but still don’t stick out as much as Sprint’s Palm Pre creapy-harpie-seance-girl-in-a-monk-orgy commercials.  Only with Verizon’s “iDevice iDont” does someone with marketing muscle (we all know about the network people that follow you around by now) that can make Android a household name.

Inovation: Garmin has a phone? A GPS centric phone?  That Garmin??? ’nuff said.

“Step the eff up” effect: Windows Mobile 6.5 looks nothing like 6.1.  Rumors of Microsoft’s “Project Pink” run rampant.  Blackberry Storm screams of “me too”, as does the scores of messaging and less than smart phones by Samsung and LG that pretend to be an iPhone with “apps” and fancy touch screen interfaces.  No one’s perfect, but it’s got the industry thinking of something more than flippers and sliders.

It’s a great time to be a gadget-head in the cell phone market right now.  When my phone does ten times more than my 1993 DOS machine, and at a much smoother click, it’s starting to feel like the future my 12 year old self looked forward to.