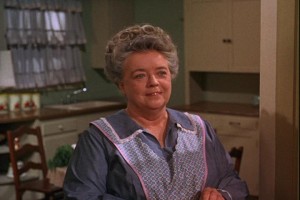 I was watching an episode of the Andy Griffith Show up here in New York on my blizzard-rescheduled holiday vacation.  It was the episode where Aunt Bee was talked into buying a car for herself so she didn’t have to bother Andy for a ride anywhere.  She was and older lady finally learning how to drive a car in the 60’s  (Late 60’s.  this was a color episode, after all.)

This made brought me to today as the older generation is struggling, or diving right into, new technology.  In Aunt Bee’s era, cars had been around for a bit, but they hadn’t been so user friendly, or cost effective that someone in her position who had an Andy to get her around a small town, would need to even bother.

Today, computers have gotten more prominent over the last several years, getting more user friendly in the form of operating systems, tablets, and smartphones, that they are almost unavoidable.

When Aunt Bee looked at the access this new car, and getting her license, it opened a whole new world of access that she was behind the curve on, but she was willing to learn.  Today, our older generation is starting to see the world opening to them by learning computers in some capacity.

So here’s to the Aunt Bee’s of the world.  The folks in my social media 101’s over at the library, and my Grandpap who’s rocking Quicken and showing me how a Mac works with a pizza box.