Finally.  The wait is over.  After a month and a half on a waiting list, the ChromeCast is in my possession. 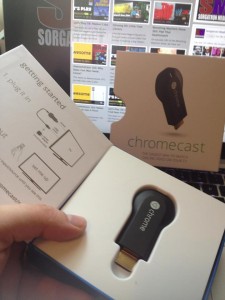 So what, exactly is it?

That’s a good question.  Even after all of the talk and reviews, I wasn’t really sure all of the applications, or lack therof.  When I finally got my update that it was finally sending (a month and a half ahead of it’s estimate.  I’m certain they over compensate.)  I wasn’t entirely remembering why I wanted one.

The ChromeCast looks like a USB dongle, with a HDMI port instead.  This little guy has just enough computing power to stream HD video over wifi.  And that’s about it from the tear apart reports.  The idea is that you can interface with your laptop (via Chrome), Android or iPhone with the device to watch your streaming video pleasure.  Right now, that means Netflix and YouTube for most everybody.  Opening my Nexus 7 tablet showed that you can stream Google Play Movies and TV to it as well.  Nice.

Setup was pretty simple.  I attached it to a back HDMI port on my 42″ Vizio that used to belong to a Roku I moved up to the office.  You have to plug it in, even if your TV supports it, it will not power from the HDMI port.  You get the usual micro USB cord, which I attached to a USB plug meant for sharing pictures on the TV.   The box also includes a short HDMI extender in case you have trouble clearing the device in your HDMI port or to help with wifi strength.  By the time I turned on the TV and swapped to the input, I was already greeted by a majestic shot of some rock formations and a “set me up” prompt. 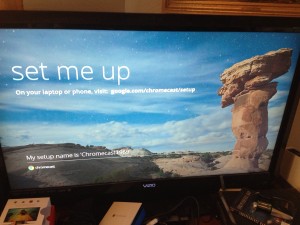 About here, I had the same question as with Google Glass: How do I interface with this thing? Namely, putting my pain in the butt wifi password in. The screen prompts you to a Chromecast setup page online that steps you through. It appears to knock you off of your wifi, temporarily, to connect over the wifi to sync. You plug in your wifi info, everything reconnects, and you’re on. The site gives you a video of just how you use it, looking for the ChromeCast icon in apps like YouTube in the example. I followed along and was watching SourceFed in no time from my iPhone. 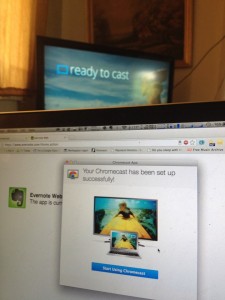 On the YouTube side, you get similar to the AppleTV sharing setup where your video window is blanked out and tells you it’s playing on the device.  Netflix had a little more presentation.  Your phone brings up the cover with an interface, as well as a nice loading screen complimenting this look, as you can see from my Weeds display in the picture. 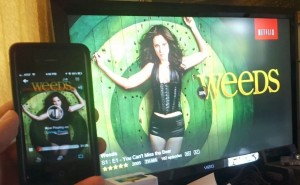 I wondered what happened if I “stepped away” from the app.  I home screened out of Netflix.  No problem.  I went into the multitask and x’d out of the app to make sure it wasn’t on my iPhone.  Still playing Dexter’s Laboratory.  So this confirmed that these apps do bypass the video independently of the device.  I did something similar with the Chrome Browser.  (more on that later).  But what happens when you come back?  Does it interrupt your playback or pick it up?  I reopened Netflix with no indication it knew that something was going on on ChromeCast.  I hit play after connecting to ChromeCast on something else, and got a big blue prompt at the top that something was playing.  Tapped that and into the controls I went!

So it seems the device does become your remote control.  Not bad when you live in a house that may already have a few of these lying around between everyone’s phones and tablets.

The evening we spent with it after this initial setup was a little more robust.  I started by setting up my wife with it on her phone.  She was already logged in on her phone under her account and ready to head into episode 3 of The A*Team.  After that, I pulled up YouTube on my Android based Nexus 7.  It was really fun to bring up a video, and with the app’s toss-the-video-in-the-corner gimmick, surf for what I wanted to toss up next.  Really smooth and really sleek.   Only after a good hour of playing with YouTube did I see some glitches.  Just a pause once in a while.  I noticed one of my own videos, a simple iPhone 4S recording and upload, skip terribly, but other similar videos on my channel didn’t hiccup once.  Still, that reliability rate is far superior than YouTube on Xbox 360 for me. 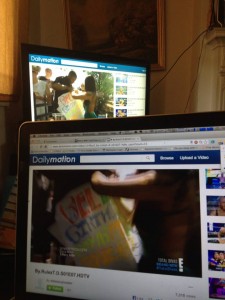 The last test was a quick look at browser sharing.  You can install a ChromeCast extension to share a tab in your browser.  This is about anything.  First, I pulled up a posting for Total Divas since I wasn’t caught up with it for the Mayhem Show.  There was a noticeable delay from the computer to the TV, but if I was eyes only on the television, it was dead on.  Full screen didn’t seem to work on this video player, so I pushed it and went to a big sticking point for me.  I opened Burn Notice, which has never been available on Hulu Plus, and put it in Chrome.  This even allowed me to play it full screen.  The quality was merely ok, but it was watchable.  This becomes that cord cutter’s best friend.  When I started killing off cable, I had a PC hooked up to the living room television to play things like Hulu or DailyShow.com.  There weren’t boxes like Roku or the Xbox that had these things available.  For someone that’s not going to get a device like those, this could be a great first step, especially for the price.

Pulling up my own Wrestling Mayhem Show embedded Youtube video surprised me when the ChromeCast took over as if I opened it on the iPhone app.  Turned off the browser, and the video was fine.  Any of the other non-supported video scenarios described above, though, do require your computer to do the heavy lifting for the stream.

And that’s not including presentation scenarios.  I can see this being used in a projector where you can share your screen.  Make sure there’s a wifi you can hop on, HDMI on the projector, and you should be good!  The immediate idea popped up of keeping one of these on your key ring just in case.  I could see having a ChromeCast in my TV and another in my computer bag just in case.  The price makes this too easy.

I also wonder if these would work connected to a machine with Wirecast or a Tricaster for “easy” sharing of your web browser in production.  Unconfirmed for now…

This is not a device you’re going to get Grandma to watch TV in a new way.  It’s simply not that simple.  You have to be a home that already has a laptop, phone, or tablet.  The experience is great with it.  The apps are limited to Netflix and YouTube (or Android Google Play video) but names are popping up for support right after the device came out, including Hulu Plus, HBO, and Pandora.  It’s a first step, and a promising one.  Daresay better than GoogleTV was.

So the ChromeCast fell into that why not toy when it came to the purchase for a geek.  I worry it may be just a hair too complicated for normals, but just easy enough for the iPhone soccer moms if she’s embracing that tech already.  For me it feels like an easier way than booting up that loud Xbox to watch some TV in an app it supports.  For me, I wish I had more HD TVs around the house to take this to, or buy one for each.

So what do you think?  Another viable option for TV watching, or another failed “why do I need this” product?