Wow.  This Wintereenmas experiment with Chachi and myself is so close, and it’s been a great week of reflecting on the games of our lives.  If you haven’t seen, we’ve been running a series on wrestling games over on WrestlingMayhemShow.com that’s been fun as well.

So today, we decided to talk about “camp outs”.  The sort of camp outs where a piece of gaming gold is on the other end.  I don’t have anything at such a young age, or with subsequent injury like my cohort, but still a big one to me.  In 2006, I was taken by the Nintendo Wii.  It was a new controller.  A new way to play.  A big gamble.  Something cheaper, different, and sure to have my staple alotment of Mario and Zelda.  I could wait on the rest of this generation. 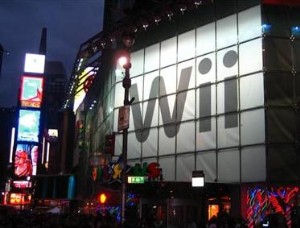 Now, typically, I would never buy a system on the day of release.  Usually, not within the first year, even.  But this time, I figured I would wait a month, have a little extra cash from the Christmas bonus, and snatch one up when the craze died down.  That was a mistake.  But I don’t think that anyone would have a problem getting their hands one of these little white boxes almost a year later.

So I set out with some old friends from AIP to get our Wii on.  We had word the that Gamestop up on McKnight Rd had a shipment coming in.  We showed up about 1 AM, and sure enough, there was a sign on the door that there would be 8 or 9 systems, and a mother and son already waiting.  Wow.  So we waited and made some friends.  By about 3 AM, we had enough people in line to fulfill the promised number of systems.  Desperate soccer moms and kids would come along, but we stood firm, as a group, to inform them that there was no reason for them to wait in this line.  It’s as if we had all made a pact.  It was a desperate time, and strangers came together for a common goal.  Revolutionary gaming.

Our store opened about 10 AM.  But we weren’t the only ones waiting in the plaza this night.  We were bookended by a Best Buy and a Target.  Both promising some variety of Nintendo Wii and Playstation 3 systems.  They opened at least 2 hours before our store, and handed out tickets even earlier.  We had the chance to watch the mayhem out front as we sat in our nice little, peaceful republic of Gamestop Wii-land.  Shenanigans were afoot.  Some kids were walking the plaza after Best Buy handed out tickets trying to sell it.  One desperate soccer mom, displeased with our “poor attitude” in telling her she was too late in showing up at 6 AM seemed that she was taking them up on it.  At one point, a pickup truck pulled up with their PS3 hanging out the window, screaming at us.  Another stopped by and tried to sell it to us.  Eventually, we were joined by my wife and company about an hour before opening, bringing us, and others, some coffee to warm up a bit, and help wait out that last desperate hour.

In the end, I got my Wii.  Zelda.  An extra controller.  And I was happy.  The wayward souls that met that night dispersed into the morning air, never to see each other again.  I wouldn’t trade the experience for the world on that cold December night.