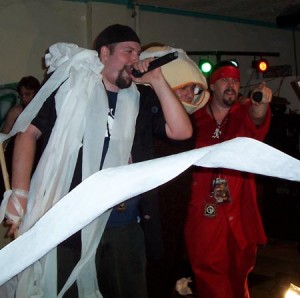 Since late 2005, I’ve been involved from the other side of the microphone, after watching my friends do it for so long.  I called up a friend I knew had a passion for it, but no oppurtunity or know how in front of him, and we selected a name that arrived with low expectations and grew from a long running joke.  (We called ourselves CRAP, and at one time, had almost 20 “honorary” members before we actually decided to get serious as a pair.  We managed to play ovver 30 shows in this iteration and pull together an album that’s still available on itunes.

So with the advent of our economical times, and upheaval in most of our careers, it seemed time to step back.  I was already looking to work on something new, and it was stalled due to those distractions.

I found that it was time I needed to make my time count.  I needed to step back on a few things to build up some other 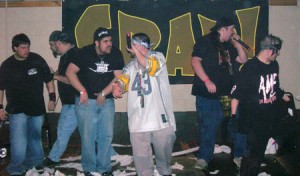 So now I’m finding my self, a good 7 months since I’ve performed a show; 10 months since CRAP was on stage, and so much longer since I’ve recorded a song.  And the bug is back.  I miss going up there and putting my energy out there.  I miss getting the reaction from the crowd, whether it was 2 or 200 (we’ve run the range, I assure you), just having someone dig what your doing.  And we’ve met a lot of good and talented people along the way over the years, and I’m happy to see they haven’t forgotten about us in our absence.

What will come next?  Will it suck?  Will anyone care?  Who cares.  It’ll be fun.

So, with baby steps, we’ll see you Saturday Night at the hkan.

One thought on “Why I’ve been Silent”