I’ve heard about it. I’ve read about it. I even scoffed at Big Daddy Shit when he said everyone he knew had problems with the XBox 360 back on CRAPCast. Then it happened.

As most know, I’ve been in New York City over the past four days, and, hence, had the Silent Ninja house/animal sit while I was away. Of course, this includes access to my extensive collection of video games. (that is the reason he does not steal the jawbones of my dog and cats) Alas, he was playing our newer Rock Band game, and was met by a freeze after one song. A restart yielded the gravest of images… 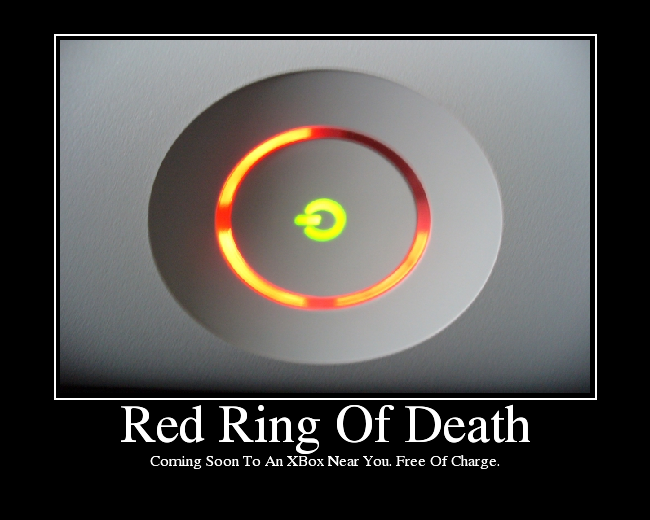 Of course, I get this news last night, my last in New York. I arrived late Monday and confirmed my fears. After settling in, and catching up on The Office and Heroes, I did the troubleshooting from the support site. I logged on, registered my serial number, and was told that I was out of warranty, and had to pay $99 for repair!! While I don’t have the receipt for my Xbox Elite, which was a gift, the date on the back says 7-7-2007, so I should be in the 3 year warranty I expected.

This will not stand!

I called the tech support line for Xbox. It was about 11 PM or so (open until 1 AM Eastern!) and received a support agent quickly after navigating the voice menu for a few minutes. He then transferred me to a hardware department, and picked back up with him on the line after a couple of minutes to hand me off personally. I explained the troubleshooting I attempted, as outlined on the site, and he accepted that, and told me that I still fell under the extended warranty thanks to the nature of the issue. I opted to have them send a box (I feel safer that way, to be honest). and will get what’s dubbed on the boards as my “coffin” in 3-5 days. On top of this, the console has it’s warrenty extended 3 more months, and I don’t lose any games/saves thanks to keeping the hard drive. Both operators were courtious, and, while the accents were suspect, were easy to understand on the phone (important in this day and age of overseas outsourced tech support)

While the problem sucks, and I’ll be away from Bioshock and Guitar Hero for 2-3 weeks, I can’t complain about how Microsoft is handling this, and have a chance to see it first hand, for posterity’s sake. Stay tuned, I’ll keep everyone updated on my ongoing experience with this. In the meantime, I’m going to dust off my Wii and GameCube games to tide over until then.

3 thoughts on “The Red Ring of Death has Tarnished My House. Part 1”