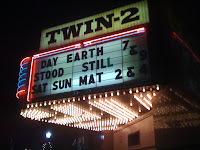 So, this past weekend, I accompanied Missy up to New York so that she could return to her annual gig of helping her Aunt Jo bartend the Fireman’s Club Christmas Party.

Now, typically, I would just sit in and talk with her grandmother, or, since setting it up over Thanksgiving, do internet things to occupy myself.  But being a Saturday night, I needed to do something, and there just isn’t much to do, even when driving to the nearby Olean or Wellsville “burgs”.  I hit up my trusty Now Playing  app, and had two options, the Carmike 8 in Olean, and the  Twin in Wellsville.  I’ve passed the latter several times in our frequent trips to the amazingly classic Texas Hots with her family, and always wanted to check it out.
So I head out to see “The Day the Earth Stood Still”.  Not something I was itching to see, but looked interesting, but I did recall that the Wolverine trailer was running with this film.  Awesome.  So I get there, and there’s one girl behind the popcorn counter, getting things popping for a patron.  She says she’ll be with me in a second.  Walks around her counter, into the ticket booth, sells me my ticket, walks back out and around the counter, and asks if I would like anything.  I had a flashback to a Muppet movie of a similar nature “Happiness Hotel in The Great Muppet Caper” perhaps?  Thanks V_Rock).  I ventured to the second floor (Bolt was playing on the ground level).  So I wasn’t sure what to expect. 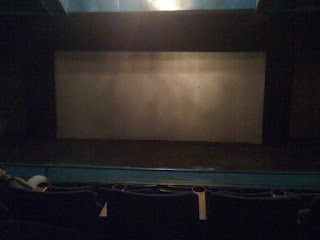 The view from my seat
I walked in to find a couple already sitting int he theater (was about 20 minutes early).  The place had about four rows of seats up front, maybe another ten on the upper level, splitting off to each side of the projector’s booth.  The screen was actually aparently below us.  And a sort of lower stage area that the stadium seating came down to.  I was very intrigued.  The walls were adorned with old carvings of angels and such.  The place actually filled pretty well before the movie started.  Mostly couples, and a small group of mouthy early tweeners that wouldn’t shut up.  The sound was certainly not stereo, or anything, but I don’t think took away from the movie.  Considering paying a few dollars less than I would have at almost any other theater, it was a great escape. 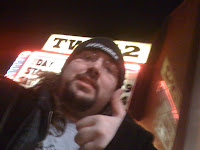 I’m amazed when I found out that Missy and her mother never really frequented this place.  She had never been there, and her mother and father went last to watch Passion of the Christ.  But the area has a nice string of small town shops, including the previously mentioned Texas Hots and a coffeeshop.  I might find myself wandering over that way in the future whenever I’m visiting the in laws…