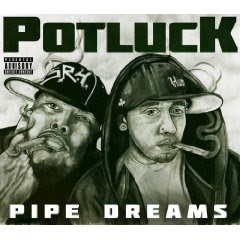 years ago amongst the big nationwide blitz as they just were signed by Suburban Noize and touring the country. In fact, I think I saw these guys around Pittsburgh three times that year. They were quite the site, with 1 Ton, a big black guy, and Underrated, a little Jewish guy, rocking the stage with a very fun style.

“Pipe Dreams” is the groups second SubNoize release, on top of multiple independent releases, previously. While I’ve always enjoyed the group, they songs and production always seemed to missing something. This disc finds it. This isn’t just another Kottonmouth Kings-like group, as some might expect from the name and material covered. This is more hip hop than that. This release has more variety, it seems. From the hard opening of “Welcome to the Movement”, the smooth sounds of “Stoner Bitch” with the aforementioned Kottonmouth Kings, to a heavy guitar riff on “Shut the Fuck Up”. The skits are still there to get to know the duo and what they’re about. One song, “Computer Love” seemed like a dabbling in the nerdcore genre for Underrated. Of course, one cannot forget the impressive 2 Minute Drill, which we saw recorded, one take, in a preview video leading up to the album’s release.

Suburban Noize often proves that they can pick some decent talent to fill out their massive roster, and Potluck is no exception.