For the longest time, I was a big fan of wrestling pay per view posters, using many of them for my wallpapers at work and home. So much so that the No Mercy Booker T poster hangs in my home office, thanks to the Mayhem guys.

But, for the longest time, there seemed to be a horrid lack in poster quality. Both TNA and WWE seemed to have lesser offerings. But, this month in particular, I was amazed by what’s come out from WWE and TNA.

First, I was surprised by the group shot they’re using for Final Resolution of the Main Event Mafia. 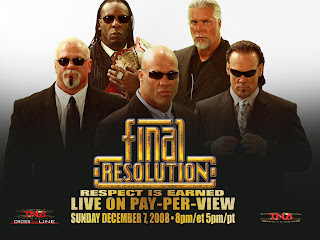 First off, think what you may, but every one of those guys in that picture have some sort of memory that has shaped my wrestling experience in the last 10 to 15 years. Sting crossing to the darkside against the NWO. Angle with countless memories, including Lesner at WrestleMania, winning the title in Pittsburgh, and even singing with Stone Cold. And all of them, dapper as hell in those kick ass suits and shades (though Kevin Nash hates sunglasses, it seems). That’s just “New Horseman” inducing imagery there. 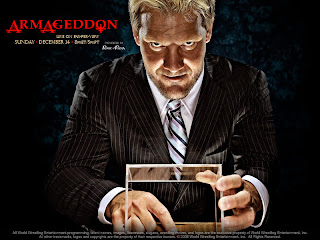 WWE has had a good run of posters lately. The pictures are so unreal. I’m pretty sure this is a digital mock up. Pretty sure. Jericho in his recently-trademark suit. That devious look only he could do, and the unreal nature of the button press. They harken back to a couple other favorites…. 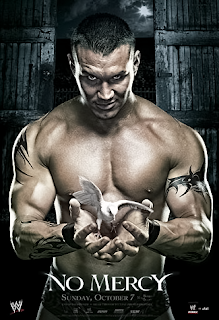 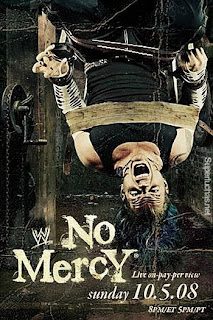 And I guess at this point, we start to notice that No Mercy seems to be the creative peak of the WWE Graphics Department for the year. sigh The art of pro wrestling…