In an effort to write “what I know” I thought I’d start a new series on here for Podcasters.  I’ve been doing Podcasts for four years, and streaming radio for at least a year previous to that, and have started from the simplest of PC microphones to a studio where I’m surrounded by equipment I’ve built up from spare computers and parts.  Over the course of this, and in projects in the future, I’m always experimenting and building on what I know and have available.  Please let me know if you find these sort of articles helpful. 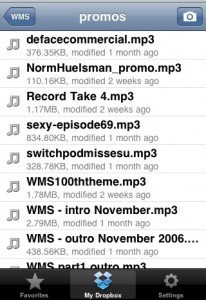 A few weeks ago, I was introduced to Dropbox. It’s one of those things that had, and still does, come up on plenty of the podcasts I listen to, and blogs I read.  Since then, I’ve started to integrate it into our work with the Wrestling Mayhem Show.  Dropbox is a product that sets a folder up on your computer (Mac, Windows, or Linux.  I use it on all three platforms).  Whatever you put in that folder gets uploaded immediately, and synced to every other computer with a connected Dropbox folder.

I’ve integrated this by storing the Wrestling Mayhem Show’s assets in this folder.  For our case, we have show intros, outros, weekly music, best of clips, guest liners, and more files that pertain to the show. This folder is synced up with all of the studio computers (four of them.  2 Windows.  2 Xubuntu), my laptop, and my office iMac.  This keeps everything tidy and available in several situations.

I’m using only a 2 GB free account, (though you can get others to join to up that to 3 GB)  50 GB ranks about $10, and goes all the way up to 100 GB.  The 2 is enough for my assets right now (after I converted them to MP3), so should be enough for any show to share these sorts of files.