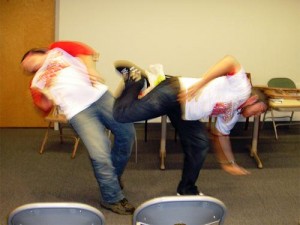 It’s that time of year again. Podcamp Pittsburgh! It’s like a informational Christmas for us geeks who love creating. I’m involved in a few sessions, though last year I ended up in way more than expected, and thought it would help to get a small preview on what we’re doing this year.

Want to learn how to start your podcast?  The most accessible way for you to create ongoing media and expose your thoughts and personality to a rabid, online world?  Why not do it with the guys that have put out, combined, over 250 episodes of said content.   Hutch, Sorg, and Will take you on a journey of electronic creation and how to get your voice heard and what you need consider when getting started.

Four years later, and they’re still at it.  Those guys who love wrestling, and those guys who love beer get together with an audience that loves violence.  Join us as we tell you about the trials, tribulations, and building that key, niche audience from our four year individual case studies, or, see what we’ve done since Podcamp Pittsburgh 3.  And don’t forget the “woooooo!” rule. (we’ll fill you in there.)

Michael Sorg, a podcaster and rapper with groups CRAP, Really Pale Gangsters, and his short stint with Deface Marketing, leads a panel of those more successful than he, including Kellee Maize of Nakturnal, Rapper, and organizer of the Hip Hop & Hookahs Series, Ryan Cassidy AKA Basick Sickness , Ron B AKA Myztery of the group Myztery N Sneak, and Walt Ribiero from Revision3 Beta’s Your Weekly Music Lesson with Walt.

Can’t make it into town?  Don’t worry.  ALL of the sessions scheduled are going to be streamed and recorded LIVE via Vivo!  Stay tuned to www.podcamppittsburgh.com for details.