This evening, Wife of the Sorg did a tremendous job of putting together a bit of a going away party for Miss Dawn Papuga. Dawn is moving to Baltimore for an exciting new oppurtunity one cannot pass up. 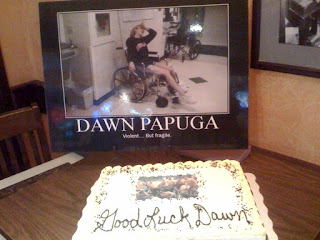 Missy did a great job of throwing this one together just under the wire of Dawn heading out of town, joining almost 20 people in sending off our friend the right way…with a roast. She had no idea, from what I understand. So we all passed around the table, and did our thing. Many jokes were had at the expense of Dawn’s fragility, alleged promiscuity, cheerleader background, and general awesomeness.

There was even a celebrity guest message from Macho Man:

But then the coupe de gras that turned on the facet:


And finally, we had cake and mingled. I ate @jen3700 and @burghbaby’s faces! 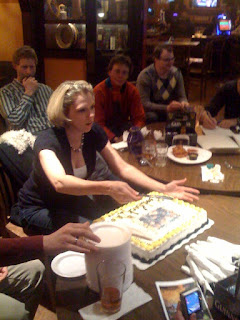 Dawn, you will be missed by your friends, and even fans of the Mayhem from New York to Texas, as proven by tonight’s responses:

TheMachoMan damn it @Sorgatron you made me cry into my cocaine, wish I could have been there live…@LyriqueTragedy be well and safe travels OOOH YEAH!!

RizzIUP @Sorgatron That combination in any situation would make @TheMachoMan cry in his cocaine. So long Papuga!

Hopefully, while we won’t be able to have a 649 with you in person her in the burgh as often, it will be like you’ve never left through the miracle of New Media. So long, Papuga.