With the release of XE8, I realized I’ve just passed my one month Glassiversary.

It did not give me flowers.

So what does that mean?  It means that I have had a good four weeks of this thing on my face.  How has it changed how I live?  Have there been any incidents?

The Reception:  I have to say that the response to this odd piece of hardware on my face has been positive or inquisitive.  I have heard people that thought it was some sort of medical device for my eye sight.  One instance in a lady looking for a similar “magnifier” for a friend.  Typically it’s someone who knows what it is asking “is that Glass?”  Most seeing it on TV or having read about it previously.  I’m under the impression that most that don’t know don’t ask.  I’m not very aware of my surroundings, as I’ve found, usually just centered on the task at hand.  I’m practically always working or heading somewhere with a purpose these days.  But Missy has let me know once in a while what sort of response she observes.  Sometimes outright pointing at it.

The Try Out:  When I spent my hour with the Google Glass girl in NewYork City, I found myself overly frustrated trying to figure out how this goes on my head and glasses in a usable fashion.  Since then, I’ve had little trouble instructing others, glasses or not, to get it usable.  The tricky part is what sort of instructions to lay out for them.  It often helps to show them the touch pad, or have them look into the screen from the other side to acquaint them with the process.  It can be hard to figure out where the touch part of the device is from the start.  I remember touching the top frame instead of the pad for much of the first day.  I tend to lean towards “Take a Picture” or “Record a Video” since I never know if internet is going to fritz on my at that moment.  Not that I’m aiming to impress, but I hate a botched demo.

I love seeing the reactions.  Many are just amazed when they see the screen displaying the time and “OK Glass” at the bottom.   Then show off the voice command for taking the picture, and seeing them light up.  That reaction of “Oh wow.  This is different”

Some of the best are when we show off the “Meet the Team” picture buried deep in the settings.  Thanks to Chachi for discovering that one!  Apparently each Android device (this is my first) has a hidden picture of the team that worked on it at Google.  In the case of Glass, that picture is a 360 degree photo that you look up, down, and around with your head.  I have seen nothing, aside from the GPS, that really works with your head movements like this.  That’s the immersive experience that is going to show why this is interesting.

Daily Driver: I’ve been pretty much wearing it non-stop.  For four weeks.  I wanted to get the full on experience of this thing.  What is it like to receive the daily input I usually do on my phone.  In this case, it’s important Tweets, Important Gmail, and the Google Now cards that tell me how far my next appointment, or home, is, the weather, Pirates baseball score, and movie times.  I often sit working and hear a chime, bobbing my head to see the tweet, then go on.  Important marked emails typically mean it’s someone I know.  So responding with a sentence or two followed by a “Sent from Google Glass” isn’t going to be too weird for them, whether it’s a business or personal correspondence.

Driving Driver: I’m not worried.  I really think those looking to pass laws haven’t even set eyes on one of these things.  I have had more distraction and blocked vision from a pair of geeky thick rim glasses I wear sometimes.  This thing is designed to sit above your vision.  I haven’t had an Android device to pair to to test the GPS, but I don’t think it would be any more distracting than the iPhone GPS mounted to my dashboard.  If you can safely change a radio or air conditioner knob without wrecking, you have the mindfulness to know when maybe you shouldn’t look up at that message that came in. 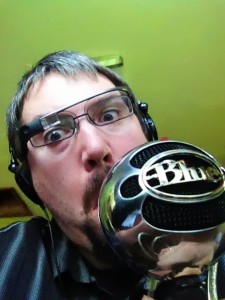 Camera Ready:  I’ve already expanded on this in it’s own post, and will likely focus more on this as we go.  The major thing is video for me, as a profession.  Having that ability to grab a shot when my phone is tied up controlling the teleprompter, or monitoring a Google Hangout session.  Sometimes, I’ve found myself wanting a shot of what’s on my iPhone, or some new way I’m using it.  And the “can’t get the camera booted and ready in times” moments like our recent Zoo trip make it invaluable.  I love the idea of catching kids or even pets without needing that extra movement to distract from the moment.

Carrying the Weight.  It still hurts a little.  When I first started out, I felt a pull on my face when I walked out of the Google office with the sun glasses on.  It’s like the muscles in my forehead make up for the extra weight on my nose.  Sometimes I just lift it up onto my head to get it off my nose for a little bit.  When the promised prescription glasses edition comes out, I can’t imagine not buying into that.

Shifting Habits.  I find that when I’m not wearing it, I was used to the idea of titling up to check the time instead the usual habitual tick of checking my wrist for a watch, which has since been replaced by looking at my phone.  When I don’t have it on is exactly when I wish I did to catch a moment or notes an idea.

What’s Missing?  A lot.  It does a lot of amazing things, but there isn’t a sense of cohesiveness everywhere.  But I see this as being so early.  This is a brand new interface.  I find myself limited by not being in a speech friendly public environment, or bus, or feeling like I should really be able to click the links on those tweets that come through.

A One Way Street.  It’s not wholly true, but it feels that way sometimes.  I can respond to tweets and emails, but I can’t initiate a communication unless starting with a video or picture I took with the device.

Bugs are there.  The wifi hand off doesn’t work as smoothly as I’m used to on my iPhone.  Sometimes the speech just refuses to respond.  Or the system simply halts.  Can’t complain, just noticeable.  This is very much not ready for the regular public in day to day use.

But I see the genius behind the plan.  Get people that are really sold on the concept from the outset.  Or else we wouldn’t be dropping the money that goes into this project just to get a chance to work with this thing.  This is an important part as they get this new UI ready to be picked up at Best Buy some time next year (we think).

I can see the potential in this thing.  It’s going to get smoother.  It’s going to get less cumbersome.  The idea of wearable tech has been experienced around me in this same time with Fitbits and Pebble Watches being around on other people in my day to day travels.  I think it will likely end up being a preference in the end.  Does this thing make sense on my face?  Would I rather have that watch?  Maybe a quiet device that manages one task like counting my steps and watching my sleep patterns.

Either way, the phone is going to be taken out of our pocket less and less.  We are entering an age where the tech is going to be paired.  Where we have a bit of a small network of wifi and bluetooth and cellular signals just enveloping our bodies to communicate one of these things to another.

Note: Most of my experiences have been using XE7.  I had a whole hour with XE6 before updating by accident at dinner that evening.  I’m sure a few of my complaints are resolved by bug fixes already with XE8.  I haven’t had the chance to experiment with SMS or Driving Directions due to my lack of Android device (remedied soon).

For Google Glass pictures, videos, and pontifications,  most goes to Google+ since it’s SO easy!  But follow me on Twitter for more on the fly thoughts and posts!

One thought on “My Month With Google Glass”