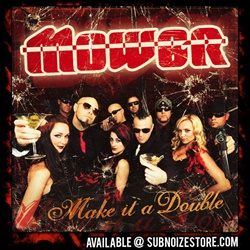 I’m a new to Mower, as a whole, but I’ve had the pleasure to see them perform a couple of times over the last few years. With “Make It a Double”, things just feel more lighthearted to start with.  We started off with “The Party” and got more of what we liked about the music live.

Then the mood changes.  When I had a chance to talk with Mower earlier this year, there was a new concept emerging.  It’s called Slower.  Described in their own press as a “jazz/lounge alter-ego”, the group took a few songs from their first two records and reworked them to show the softer side of their material.  Maybe not being a longer time Mower listener, maybe these songs don’t have the impact they would the big fans.  But in the long run, this is a good album to introduce you to the diversity of the group, for sure.

After a short break entitled “Alien”, the second half of the album was so low key, well, it was unnerving.  Out of curiosity, I passed the CD off to a coworker that was a bit into the rock n roll, nothing heavy except straight metal, and he loved the second half.

The only downside is that the average listener coming across this in their record store might not know what they’re getting into.  The album is also full of guest appearances by members of Anthrax, Snot, Stone Sour, and Mad Juana.  A list that any long time music fan can appreciate.  In the long run, the disc lifts the veil on Mower as a group that shouldn’t disappoint.

The album is out now.