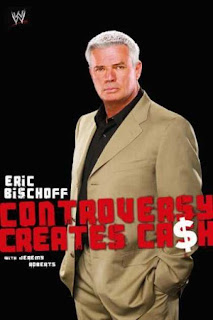 About two Christmas’s ago, I was given the book Controversy Creates Cash by Eric Bischoff from my bud from my rap group. It seemed like a boring read at first. I’ve had issue with the bland, sports writer stylings of past books like Kurt Angle’s, and thought this was going to be the same.

Nearly two years later, I revisited this book. After the Death of WCW and Between the Ropes, as well as a recent Kevin Nash shoot interview I’ve watched, it gave me a new perspective to approach this book again. I realized this book had a rather unique perspective on what really happened to WCW. No one likely had the interactions with the Turner, then AOL Time Warner, brass as Bischoff. This book details his view on his interactions, and lack of support in that regard, as well as how talent was to deal with. His coming up from AWA, then transitioning as a low level guy in WCW, to the head of the company is an interesting story, especially if you wonder about how a corporation like that works. Eric is very frank about where he thinks he stood in the rise of wrestling in the late 90’s, and it’s effect in WWE as we know it today.

The biggest problem I had with this book was the repetition. Often, some of these books come off a certain way since they are often ghostwritten along with a tape recorder. Unfortunately, you often get parts that are repeated. Another interesting note is Bischoff’s defense against the “Dirt Sheets”. While he claims so often to not take stock in what they say about his actions in WCW, he sure does defend directly defend to them a lot. Understandable, since they are so prevalent in wrestling “news” over the last ten years.

Aside from some writing style misgivings, This book left a good bit of incite in the other side of one of the hottest times in wrestling history.

You can pick up the paperback for “Controversy Creates Cash” right here.