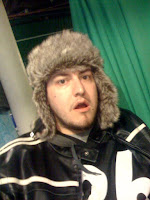 This has been one of those weeks. I think Will put it best in the picture provided. It seems that with the Twitter and Plurk streams, you can feel the collective groans as we all struggle with our own jobs and frustrations that life hands us. And I’m not talking the typical “complaining twitters” that scatter through the twitterverse.

Today, that continued, but with a catalyst. As we all meandered into work this morning, feeling the aches and pains of what we deal with; whatever effect the economy has had on our jobs, new traffic patterns thank to the yearly “First Snow Freak Out” But as the morning carried on, it became aparent that something was wrong. First a random, and almost rare, tweet by Pittgirl herself. Then reactions. Then finally, catching on and reading what happened. Then, the collective reaction of the “I am PittGirl” posts. Everyone had a chance to toss out that they thought her now gone blog was something of meaning. It was a representation of what our town was about. It encompassed something that really helped to characterize the area. It wasn’t alone in this, and hopefully these won’t be the last with initiatives just making waves.

The blog provided entertainment. It provided incite in the world around us, locally. It was inspiring.

Aside from that, the Pens lost tonight. Even they were too saddened to play.

Goodnight @PittGirl. Whereever you are…