For 8 years, I’ve run a site called WesternPAJuggalos.com.  A fan site for “Juggalos”.  Fans of Insane Clown Posse and their line of music.  On November 15, I’m closing the site to make room for future projects.  So I’ve been inspired to create a countdown after talking to some people at Podcamp Pittsburgh 4 that were in similar situations.

Man.  Those were the days.  November of 2001.  I had found a great group of people at the Art Institute of 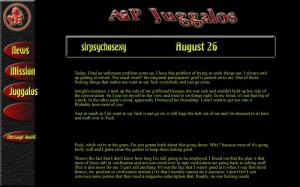 Pittsburgh in my first year, at this point.  We seemed to grow organically around the tables of the lobby.  This was just after the Gathering of the Juggalos in Toledo, and the advent of “narrowed down” Juggalo fan sites were really big.  Pittsburgh Juggalos, Midwest Juggalos, Ohio Juggalos, and the like where the big thing.  We sat around and looked at the table full of us, and I believe just had our bit of a Halloween outing where we painted up and walked around downtown.

So we marched up to a computer lab on a break between classes, and started piecing a design (which was amazingly bad for an art student) and our own version of the classic hatchet man…with a paint brush and palette.  (from what I recall, Dingo was the mind behind that one).

And thus, AIP Juggalos was born…