From the Sorgatron Media Creators Newsletter List for April 21, 2016.  You can Subscribe to it here or read the archive! 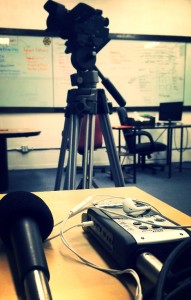 Who is your audience?  Are you simply trying to get a wide spread of eyeballs or ears to get the content out there, or is there a purpose?  For one client, it’s been to establish a brand and generate supplemental material for a counseling practice.  Another simply wants to inform they’re already substantial audience that logistically can’t really grow (but has a pretty good 3-4 year turnover).

When you’re making content in the same space, you don’t necessarily have to look at the Joe Rogans and Leo Laportes of the platform as your bar of success.

Last year at Podcamp Pittsburgh X, there was a wonderful session we didn’t get out much (partially because some of the technical issues during it) from Chris Brogan where he mentioned how he was over Twitter because it doesn’t make him money.  IF you had 5000 listeners to your Podcast, what does that accomplish.  But if you have 300 listeners that now are buying your high dollar service, or becoming a more educated attendee to your event.  That is your value.

Well, maybe not yours. But you have to figure that out.

Find your group. Watching the lull and regrowth of Podcasting in Pittsburgh, and why we should find our groups to compare notes and grow as a Podcaster, Blogger, or other creatives.

Since this is aimed for a print publication that will be gracing doctor’s offices across the tri-state area, I wanted to share this with you, my faithful blog readers (Hello?  Are you out there?) first.  Stay tuned to (client) S’eclairer’s website for details as we get things off the ground!

I have been a student of social media for years.  The early days of Twitter.  The opening of Facebook to more than the closed college crowds.  I’ve had my try at building communities before many of these tools were available to us.  Over the years watching others create communities and broadcast their deepest thoughts, and sometimes not so deep perspectives, I’ve been amazed at the ways that it’s been used as a tool for people to overcome obstacles or grow closer.

I’m a fan of Kevin Smith since my early days watching Clerks, and the rest the Jersey series. I’ve listened to Smodcast (www.smodcast.com.  Warning: Explicit Content) for a while now, and discovered I was behind on this new series titled “Jay and Silent Bob Get Old”. I’m not a fan of all of their shows, but love the dialog between Smith and Scott Mosier or Smith and Jason Mewes. I ran through about the first seven episodes of this newer show as they detailed the stories of Mewes and his battles with addictions and rehab over the very same years that I was enjoying the Jay and Silent Bob series of movies.

Then it hit me. The reveal. The fact that these Podcasts were a way to keep Kevin Smith’s friend Jason Mewes clean by creating a support group of thousands of listeners every week that he has to answer to. This way if he were ever to fall off the wagon once more, the purpose of a show like this was tremendous, and on such a large stage. I started thinking about similar uses of Podcasting.

Others have started using social media to meet other goals in their lives.  One of the most recent phenomonons is to “Tweet your weight” or have a food blog.  Leo Laporte, a technology radio and netcasting host for his own This Week in Tech (www.twit.tv) network, is someone making his weight loss accountable to over 2,700 followers by using the Withings Wifi Bodyscale to report his latest weight at www.Twitter.com/leos_scale automatically.  Others, such as Will Rutherford of www.thoughtfulriot.com, reports his daily eatings on a separate blog (thehungrylunchbox.blogspot.com), which is a concept he networks with a group of friends doing the same, which helps him think twice about what he may be eating.

But social media can also be less about accountability, and more about connecting, as well.

Joe and Betsy of www.joeandbetsy.com were a couple that were displaced in Pittsburgh, PA and used blogging to cope with that fish out of water situation and stay connected to their friends and family back home.  Norm Huelsman, a fellow organizer of the Podcamp Pittsburgh “Unconference” has used his blogging tools to connect his family through a series of blogs rooted at www.huelsman.org.

My friend Robert Bailie of www.BurghsEyeView.com started his show as a father/son bonding show of sorts to follow his football career.  “The show was actually a vehicle that helped me connect with my son in a man to man enviroment as we navigated my divorce from his mother…” said Hutch when I asked him about it recently.  A purpose not discussed ,ever, on the show, but important to the show’s creator.  But when Hutch Sr. was sent to Iraq for a period of time, it helped cope with the time away, and eventually became a way to connect, as he calls it “Pittsburghers in exile”, those that love their fair city, but have been drawn away by their career, education, or other means.

Looking for help to start a conversation?

Michael Sorg is the Director of Web Media at S’eclairer, a Co-organizer of Podcamp Pittsburgh, and Video and Web Media Producer for his own Sorgatron Media where he continues to stretch his creating muscles.